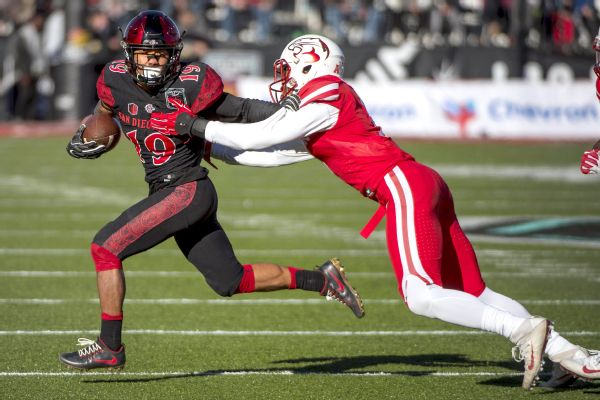 Pumphrey surpassed former Wisconsin star Ron Dayne's mark of 6,397 yards early in the fourth quarter of the Aztecs' 34-10 win over Houston during the Las Vegas Bowl Presented by Geico on Saturday.

"It means the world to me," Pumphrey said as his father wiped away tears before hugging him.

Pumphrey, a Las Vegas native, broke the mark on a 15-yard sweep to the right side in the fourth quarter. His San Diego State teammates briefly paused to mob him, while family and friends in the stands relished the emotional moment.

The record does come with a caveat: Dayne rushed for 728 yards over four bowl games in his career, but the NCAA doesn't credit those yards to his total because it didn't start counting bowl games toward records until 2002. Dayne played for the Badgers from 1996 to '99. His career rushing total including bowl games stands at 7,125 yards.

As a result, Pumphrey is now technically the FBS all-time rushing champion. He got there despite the emergence of teammate Rashaad Penny, who had taken away carries from Pumphrey this season. In fact, Pumphrey and Penny are the first pair of teammates to rush for 2,000 yards and 1,000 yards, respectively, in the same season.

"It's emotional,'' Penny said. "To watch that guy do what he do and accomplish so many goals -- it's amazing.''

"We're just as fired up as he is,'' linebacker Calvin Munson said of Pumphrey. "All of our defensive guys hate him in practice because he is good and he gets us better. He couldn't have done it without the O-line, the fullbacks, the offense.

"I'm just trying to take some credit for you,'' Munson joked, with a smiling Pumphrey sitting next to him.

Coach Rocky Long turned to Munson and responded: "You don't block anybody.''

Pumphrey had 1 yard rushing on seven carries in the first quarter, and the Aztecs didn't record a first down until the first play of the second quarter -- on a penalty for running into the kicker.

"The first quarter, they came out with more intensity than we did, at least their defensive side of the ball,'' Pumphrey said.

But Pumphrey started to gash Houston on the perimeter, giving San Diego State the lead for good on a 32-yard touchdown run late in the third quarter, and the defense intercepted four of Houston quarterback Greg Ward Jr.'s passes in the second half.

Pumphrey passed Texas' D'Onta Foreman, who will not play in a bowl game, for the 2016 season rushing lead. Foreman had 2,028 yards for the season.