Drue Tranquill leaves for Irish after injury suffered while celebrating 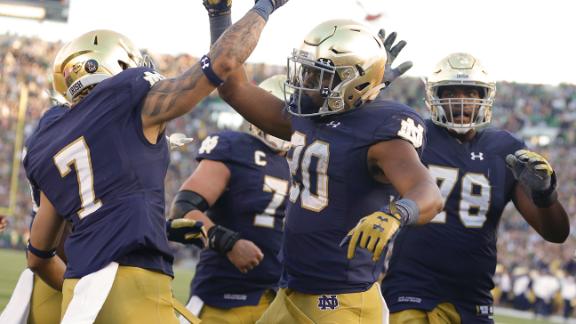 Tranquill, who tore the ACL in his left knee last November, appeared to hurt his right knee while chest-bumping teammate Joe Schmidt after a crucial third-down pass breakup in the end zone late in the second quarter.

The Fighting Irish athletic training staff rushed to aid Tranquill, who appeared to be fighting back tears as he was helped off the field.

After the game, coach Brian Kelly said Tranquill it was too soon to determine the extent of the injury, but he "wasn't optimistic."

"Doesn't look very good right now," Kelly said. "We only have a manual exam to go on right now. The manual exam was not a good one. But we'll get an MRI tomorrow morning and then we'll have definitive results. But we're not optimistic at this point.

"Matthias [Farley]went in there and was the next man in again. Unfortunately losing Drue, Drue played very well in the first half, very well. He was on point with his keys, fighting off blocks, making tackles. They wanted to run counter-option based upon what we were doing. We did a great job of stringing it out, fighting off the extra hat."