Dwyane Wade returns, but Bulls fall to eighth spot with loss to Nets 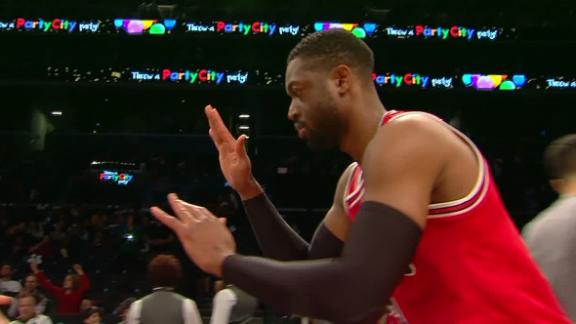 Wade, who was initially ruled out for the rest of the regular season after suffering the injury in a March 15 loss to the Memphis Grizzlies, said he didn't have any pain in the elbow after the game.

"Elbow felt cool," Wade said. "Just my legs, trying to get my legs back. And my wind back. But my elbow felt great."

Wade said after the game he felt his health was "trending up." After a sluggish start to the contest, he ended up playing 25 minutes total, five more than Bulls head coach Fred Hoiberg thought he would play pregame.

"I thought as the game went on he got a little more comfortable," Hoiberg said. "Early on, you could tell he had a little rust, as anybody would have coming back after as many games as he missed.

"I wanted to get him in there at the end. I felt it was the best five-man lineup to put out there to finish games for us. Unfortunately, we couldn't get it done."

The positivity from Wade's return didn't last long. With Saturday's loss, the Bulls gave away a chance to lock down one of the final playoff spots in the Eastern Conference. They allowed a Nets team that came into the night with just 19 wins to claw back from a nine-point fourth-quarter deficit. The Nets played tougher than the Bulls down the stretch, a fact that frustrated the players and coaches in a quiet Bulls locker room.

With the Indiana Pacers' win over the Orlando Magic on Saturday, the Bulls now sit in the eighth and final spot in the Eastern Conference.

The Bulls have proved all year they can beat the best teams in the league and lose to the worst. They have now lost to the New York Knicks and the Nets in the past five days.

"We've had a couple of these losses all year," Bulls All-Star swingman Jimmy Butler said. "Is it deflating? Nah. Because we're still in it, man. All we got to do is win. We're right there. But we got to figure out a way to pull these games out -- and get stops and score some baskets -- and we should be OK."

The Bulls have two more regular-season games left, both of which will be at the United Center: a Monday duel against the Magic; and a Wednesday rematch against the Nets.

Wade, 35, said he is hopeful he can find his rhythm and help push the Bulls across the regular-season finish line and into the playoffs. He said he thought he started playing better in the second half on Saturday.

"Trying to be a little bit more aggressive [than] the first half," Wade said. "Trying to read the game. I haven't played with my teammates in a while, so a few turnovers trying to get back in a groove and then just trying to figure out my spot. In the second half, I came out a little bit more aggressive. So from that standpoint, I'm glad I was able to get out here. My goal was to get back for the playoffs, but I'm glad I'm able to get out here now a couple games."

Butler said he knows the Bulls will be in better shape when Wade is able to find that rhythm again.

"It's going to make a big difference," Butler said. "Especially whenever he gets into a rhythm and he's making those shots that he always takes and he normally makes. That's what we want. We want him out there comfortable, confident and playing basketball without thinking. He's getting back to that."