Emmanuel Sanders: No title in 2015 would be 'bust season' for Broncos 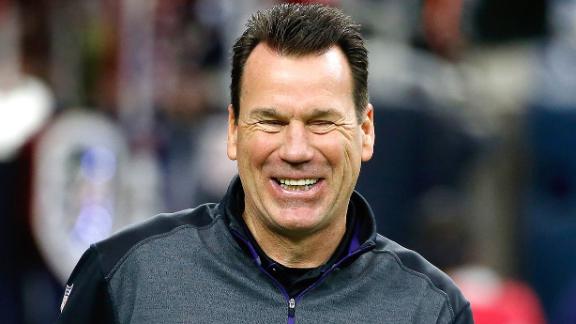 ENGLEWOOD, Colo. -- The Denver Broncos have a new coaching staff and plenty of new faces on their roster.


But when coach Gary Kubiak addressed the team Monday -- the first day of the Broncos' offseason program -- it was clear the championship expectations the team has carried over much of the last three seasons are still around.


"We want to get back there and we want to win it. The main focus of this group is to win a Super Bowl. That's the expectation. If we don't bring a Super Bowl to this city this year, then it's a bust season."


Monday was the first chance for Kubiak to meet with the players as a group since he was hired this past January. And, as he did when Elway formally introduced him as the team's new coach three months ago, Kubiak took the opportunity to remind Broncos players he won't be stepping back from the championship expectations.


The Broncos have won four consecutive AFC West titles and spent much of Peyton Manning's tenure at quarterback as one of the AFC's front-runners for the Super Bowl. But a 12-4 finish as well as two 13-3 finishes have not resulted in a title, and the Broncos' appearance in Super Bowl XLVIII to close out the 2013 season ended in a 35-point loss to the Seattle Seahawks.


"[He said it's] going to take a special group of men to bring world championship to this city, but we have the guys to do it," Sanders said. "That's the focus.


Because Kubiak is a new coach, the Broncos are one of the teams allowed to open their offseason work early. They are currently in phase one, which is conditioning work only.


There was one notable absence, however: Wide receiver Demaryius Thomas, who led the team with 111 catches and 1,619 yards last season, was not at the Broncos' suburban Denver complex. Thomas said in recent weeks he will remain in Atlanta during the offseason program as his representatives and the team try to work out a new long-term deal.