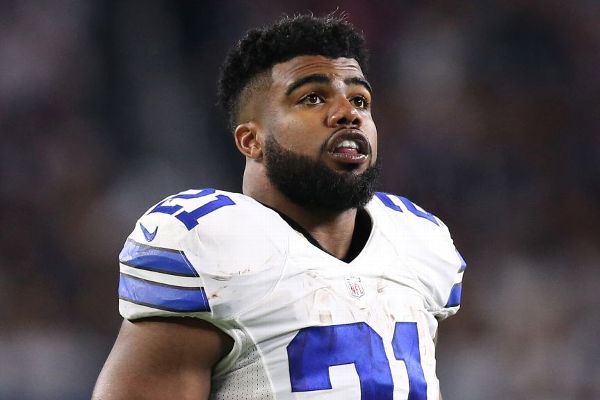 Police in Aventura, Florida, were called to the apartment of Dallas Cowboys running back Ezekiel Elliott to investigate an altercation with a woman in February, according to a report in USA Today Sports.

The alleged incident involved the same woman who made a domestic abuse claim against Elliott in July, according to the newspaper, which obtained a copy of the incident report.

The accuser alleged that Elliott, who was in Florida training for the draft, had pushed her against a wall resulting in left shoulder pain, according to the report, which also said there were no physical signs of injury and no independent witnesses.

There were no arrests, and there is no record the accuser pursued charges, Terry Chavez, a spokesperson for the Miami-Dade State Attorney's office, told USA Today.

Earlier this week, Elliott said he was interviewed by the NFL about six weeks ago about the abuse claim made against him in July. He characterized there being "an ongoing investigation" but said he didn't really know what was going on.

Prosecutors in Ohio declined to press charges over the summer in a domestic violence case involving the fourth overall draft pick. In September, when Ohio officials decided not to file criminal charges, the Columbus city attorney's office cited conflicting and inconsistent information in evidence.

After the win Sunday against the Philadelphia Eagles, Cowboys owner and general manager Jerry Jones sounded confident Elliott would not be penalized by the league. However, that was before this report.

"People that have a lot more information than I have have given him a total clean bill of health," Jones said. "I do know that all the real information that anybody has is that he doesn't have an issue."

Jones acknowledged having a conversation with Lisa Friel, who serves as special counsel to the NFL involving personal conduct issues, at the recent owners meetings in Houston. He called it a "good discussion," and said it might have gotten loud because, "I was having to talk over the music."

Jones' position is that time has elapsed since the incident and Elliott will not face any legal repercussions in Ohio. The NFL does not require the same burden of proof in its personal conduct policy. A player does not have to be charged in the legal system to have run afoul of the policy.

"I don't know that the NFL has a closure, has a situation where they've cut it close, which could be a frailty of the system," Jones said after the Eagles game. "As you know in law, one of the things in the Constitution is that not only are you innocent before proven guilty, you get quick addressing and then you don't get it drawn out. It has certain time frames and has a lot of economic limitations. So we have to, in my mind, just make sure that we inject that in the type of looking for information that we do in the NFL. But law has many, if you will a couple 100 years at least, working on through how you basically create some time frames, create how it's initiated, create what the circumstances are about. And several which pertain to the NFL and companies, they don't necessarily have to go by that. We have a different deal though. We're so public and our issues are so public that we don't afford some of the things for some of the players, other people involved in the NFL, that the law does."