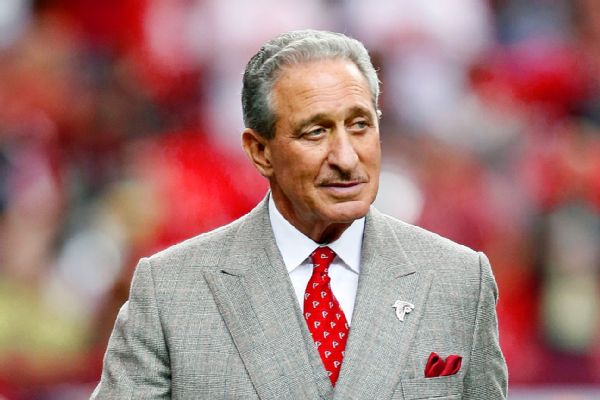 A string of emails that began in 2010 with the Atlanta Falcons' head trainer and reached all the way to owner Arthur Blank showed a franchise worried about its "excessive" reliance on painkillers to treat players and the potential embarrassment that could cause the team and the NFL.

One topic raised in the email chain concerned a review by an outside agency that found that the team spent $81,000 on medication prescriptions for players in 2009 -- nearly three times the league average.

Almost every recipient on the email chain -- including Blank, president Rich McKay, general manager Thomas Dimitroff and then-head athletic trainer Marty Lauzon -- is still with the team, which plays the New England Patriots in Super Bowl LI on Sunday.

"That's being litigated now. That's not something we're going discuss right now," Dimitroff said Monday night when asked about the emails. "When the time is right, we'll readdress that."

The emails were entered into court record Thursday as part of a proposed class-action lawsuit by more than 1,800 former NFL players who claim they were encouraged by the medical and training staffs of NFL teams to abuse painkillers and continue playing without regard for their long-term health.

The case is being heard in the Northern District of California by U.S. District Court Judge William Alsup. The same allegations were originally filed in a 2014 class-action lawsuit that is currently before the 9th Circuit Court of Appeals.

The email chain was presented to the court as an example of thousands of similar documents gathered during discovery that the ex-players' lawyers want entered into the record. It was coincidental that the Falcons chain was released before the Super Bowl.

Lauzon was not with the team at the time of the critical review. He became the Falcons' head trainer in January 2010 and currently serves as the team's director of sports medicine and performance.

He first wrote to Dimitroff in May 2010 to note the conclusions contained in the review by SportPharm, an outside agency brought in by the NFL to look at how teams purchased, dispensed and tracked medications, including powerful painkillers and prescription drugs. Among the problems Lauzon highlighted from SportPharm's review was the Falcons' "excessive dispensation" of narcotics and other medications, which risked creating a "culture of dependency."

"Within the first days on the job, I was informed that we barely missed a DEA [Drug Enforcement Agency] investigation because of improper billing issues," Lauzon told Dimitroff.

A central contention of the painkiller lawsuit is that teams did not properly keep records about prescriptions and which players were getting drugs.

Dimitroff forwarded the email to the owner just hours later.

"I thought it quite important for you to be aware of a rather sensitive subject and one we need to discuss before we include others on this topic matter," Dimitroff wrote to Blank.

"Agree -- we should talk about this together with Rich [McKay]," Blank replied.

It's not clear which practices changed as part of the discussion, and there is no evidence the Falcons violated league rules. What's clear is that Lauzon was warning team executives that practices uncovered during the review could embarrass the team and raise compliance issues with the NFL.

Lauzon's first email to Dimitroff also copied in Jeff Fish, who was Atlanta's strength coach at the time and was released by the club in January 2013. The trainer expressed concerns that "players at the end of their careers going through medical issues" would seek media attention and "say they abused or are now addicted" to drugs as a result of the club's practices.

Dimitroff subsequently forwarded the emails to McKay, who remains team president and also serves as chairman of the NFL Competition Committee, making him one of the more influential executives in the league.

McKay reached out the next day to Dr. Elliot Pellman, a rheumatologist who controversially led the NFL's committee on brain injury at the time and later became a league medical adviser.

He asked Pellman whether Mary-Ann Fleming, who was then the director of player benefits in the league office, had recommended the Falcons replace their doctors in the wake of the same critical review and if she was aware who actually administered the club's day-to-day medical regimen.

"I need to know -- is this really true and does she realize the on-site trainer is really in control???" McKay wrote, then added, "I need to keep this confidential ..."

Lauzon noted that Fleming had seen the SportPharm review and recommended the Falcons "start clean on all levels" -- a new team doctor, head trainer and even a new pharmacy account number.