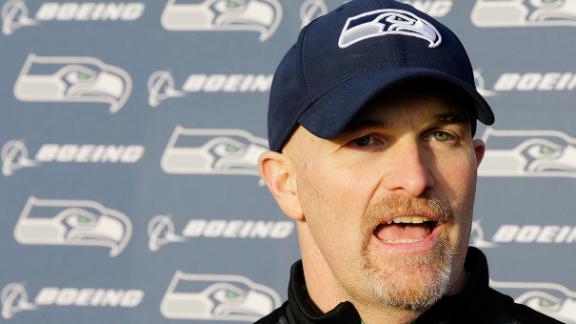 Quinn is expected to fly to Atlanta on Monday with Falcons officials, including owner Arthur Blank, and will be introduced at a Tuesday news conference, sources told ESPN.

The Falcons were prohibited from agreeing to a contract with Quinn until after the Seahawks finished competing in Sunday's Super Bowl.

Quinn would not discuss the move after the Seahawks' 28-24 loss to the Patriots.

"In respect to this game, what a terrific game we were all a part of," Quinn said. "So for tonight I'd like to make the focus all about our players, both teams'. It was a great contest. You could see how hard guys played. As a coach, that's really what you're looking for, great effort first. ... You see the guys in the locker room, they gave everything they had. You can't ask for more than that as a coach."

Quinn, 44, spent the past two seasons as the Seahawks' defensive coordinator after holding the same position at the University of Florida. He emerged as the leading candidate for the Falcons' job after the first round of interviews.

"It really wasn't a time for that," he said when asked whether any of the Seahawks players discussed his move. "It was more how do we come to grips with this. It was such a hard time at the end. Just my respect for so many of these players is so high, and we're so connected. I really feel for them. They put everything they had into this."

Quinn got his coaching start in 1994 as the defensive line coach at William & Mary. His first NFL job was as a defensive quality control assistant with the San Francisco 49ers in 2001. But his ascent occurred over the past two seasons with the Seahawks; he orchestrated a defense that ranked first in seven different statistical categories in 2013 and in five different statistical categories this past season. Quinn's defense was an integral part of Seattle's Super Bowl victory last year and this year's runner-up finish.

Blank implied that Quinn would have control of the Falcons' 53-man roster when asked about Julio Jones getting a long-term contract.

"Well, I think it's a decision that the head coach will look at the talent on the roster," Blank told ESPN.com. "Julio's been a great player for us and a great talent, and he represents us on the field and off the field as well as anybody else. As the owner, it's not my decision to make. The new coach will spend a great deal of time assessing the roster and all of our players, and obviously Julio is a critical one."

Quinn will have the challenge of adjusting to his new role as a first-time head coach. The Falcons went the same direction with their previous coach when Mike Smith was hired in 2008 following a five-year stint as the Jacksonville Jaguars' defensive coordinator. Smith went on to be the winningest coach in Falcons history (66-46) before being fired after a 6-10 finish this past season.

Pieces of Quinn's new staff are already in place, with Kyle Shanahan set to be his offensive coordinator and Richard Smith the defensive coordinator. Quinn's longtime friend, Raheem Morris, will be the assistant head coach in charge of defensive backs.

Quinn was in the early stages of his coaching career at Hofstra University when Morris played defensive back there, and the two later coached on the same staff at the school.

A native of Morristown, N.J., Quinn was a defensive lineman at Salisbury State University (now Salisbury University) in Maryland. He recorded 145 career tackles, eight tackles for losses, one sack and one interception in 32 collegiate games.

Some of Quinn's coaching influences include Seahawks coach Pete Carroll, Alabama coach and former Dolphins coach Nick Saban, and the late Joe Gardi, who was the defensive coordinator for the Jets during the days of the "Sack Exchange." Gardi was the head coach at Hofstra when Quinn was an assistant at the school.