Fastball command, success at Wrigley will be critical for Cole Hamels 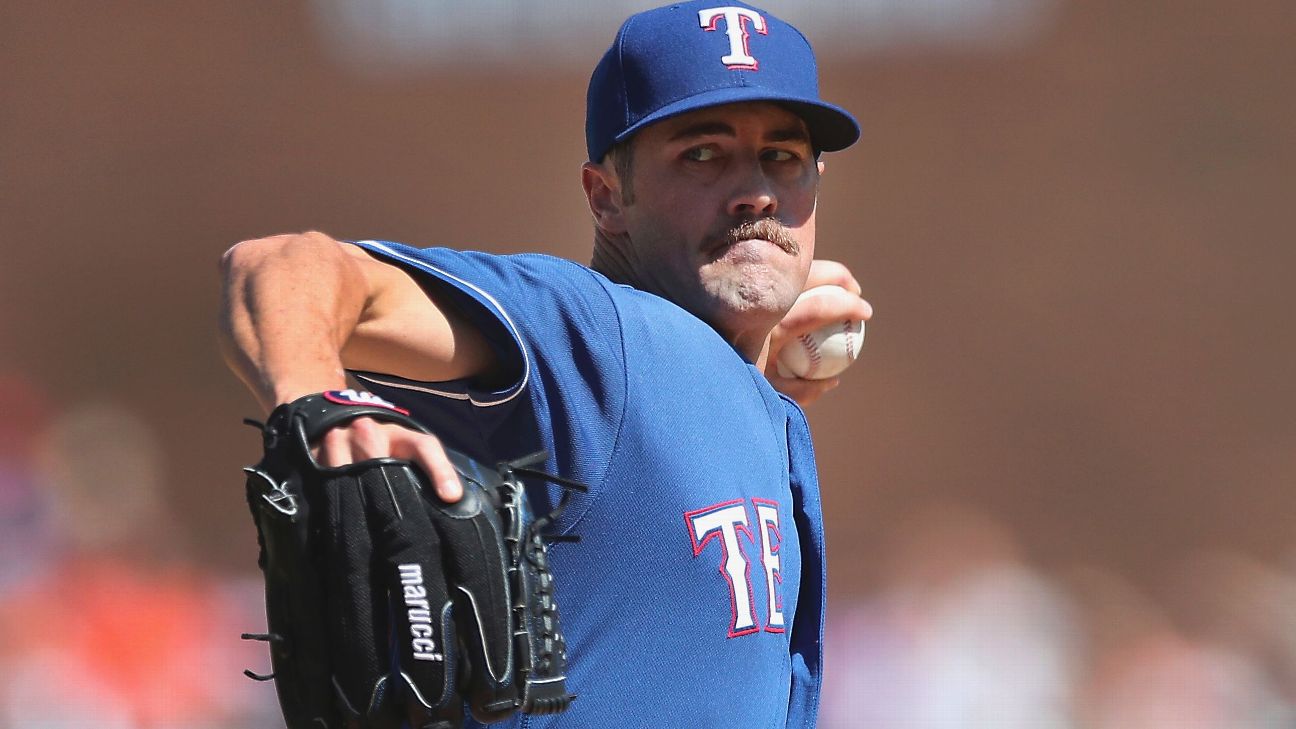 ST. LOUIS -- The Chicago Cubs added a huge name, Cole Hamels, for their stretch run. But will it be the Hamels everyone remembers from his glory days in Philadelphia or the one with the highest ERA and OPS against in baseball since late June? We attempt to answer that question and a few more about the Cubs' newest arm.

What's up with those home/road splits?

Hamels is the only qualified pitcher with a 6.00-plus ERA at home and a sub-3.00 on the road. It sounds great to get the former Ranger out of Globe Life Park in Arlington, Texas, but even the Cubs aren't putting too much stock in it.

"That's a factor, but home/road splits in terms of analysis only go so far," Cubs president Theo Epstein said. "You're taking what is already a small sample, a partial season, and dicing it into even smaller parts, so you can really get out of control crafting your own narrative."

Having said that, Hamels threw a no-hitter at Wrigley Field in 2015 and has a career 1.76 ERA in six starts. That can't be bad, right?

That's a good question. If he can execute better with his fastball, it will go a long way toward a successful campaign with the Cubs. Opposing batters were hitting .329 off it in his road starts this season, and away from home was where he was much better overall.

"The mistakes have been hit and have been hit in a certain part of the zone," Epstein said. "His fastball still plays when executed."

Epstein indicated the Cubs may provide some tweaks to help him out but realize Hamels is one of the smartest players in the game. They're banking on a change of scenery combined with a pennant race to bring out the best in him. At 35, "sky's the limit" may be a little strong, but quality starts are a realistic goal.

What does Hamels still do well? Where has he dropped off?

You know about his very hittable fastball, which is only about 1 mph slower than his last really good season, in 2016. Overall, the opposition is hitting .361 off it. Where he has excelled this season is with some of his slower stuff. Hamels has thrown 500 cutters, with opponents hitting just .204 in at-bats that end versus that pitch. Off his curveball, it's even better -- just .125.

Could he start a playoff game for the Cubs?

Even without throwing a pitch yet for his new team, Hamels would be considered a potential playoff pitcher simply based on his pedigree and experience. He won the 2008 World Series MVP against the Tampa Bay Rays, managed then by current Cubs skipper Joe Maddon.

"I've only seen this guy good," Maddon said. "Really good in the World Series back in the day. Has pitched well at Wrigley Field. Just a tremendous competitor."

Epstein talked more of Hamels' character than he did his stuff, which means that if his stuff is good enough, he'll be a second-half -- and October -- mainstay.

What does this mean for Tyler Chatwood?

Here is where things get tricky.

Under normal circumstances, Chatwood would be sent to the bullpen, or something worse, if he were on the last year of his deal. The major league leader in walks might survive the addition of Hamels simply because swingman Mike Montgomery is running out of gas and may have to go to the pen. The Cubs have yet to announce what their plans are.

"With some of the injuries we've had, with some of the struggles we've had in certain areas, Monty's innings becoming an issue, as you get deeper and deeper into the season, we felt like it would be irresponsible not to add at least one starting pitcher," Epstein said.

Montgomery's season high in innings is 130, achieved last year. He's at 87 this season but failed miserably in the postseason last year, mostly due to fatigue. The Cubs will try to limit his exposure, either by moving him to the bullpen or by using a six-man rotation at some point to give everyone ample rest.

Then again, Chatwood could use some time to fix his mechanical issues without having to pitch every five days. It's a tough decision for the team.

If Montgomery remains in the rotation, it will give the Cubs four lefties on the starting staff, including Hamels, Jon Lester and Jose Quintana. Is that bad? Not if all four deserve to be in the rotation. In other words, it's bad if they struggle, but it won't be bad just because they're all left-handed.

"It's called [Jim] Abbott, [Mark] Langston and [Chuck] Finley," Maddon said, referencing three lefty starters from his days with the Angels. "That wasn't so bad. And if you go back to the 1979 White Sox, they had four. It happens. It's OK to have five righties, but once you get a couple lefties out there, everyone is concerned with that. If the quality of the left-hander is good, then it doesn't matter. ... I've seen it work before."

What are the chances that Hamels is with the Cubs in 2019?

Slim. He has a team option for $20 million, and the Cubs already have plenty of their payroll tied up in their starting staff. However, if he pitches like Justin Verlander did after the Astros traded for him last season, and Yu Darvish contributes very little, then you never know. Put it down as unlikely and check back around Nov. 1.

Does this say anything about Yu Darvish's progress?

It really doesn't. The Cubs were seeking pitching depth no matter what the situation was with Darvish. But instead of acquiring pure depth, Hamels could be a key part of the stretch run. If Darvish returns, the Cubs view that as gravy. If he doesn't, they've replaced him with a former World Series MVP but with decidedly less stuff in his arsenal than Darvish technically would have.

What does the Cubs' ideal rotation look like now?

By default, Hamels slides in at No. 4, with Lester still the ace, followed by Kyle Hendricks and Quintana, who sometimes can alternate between No. 2 and No. 3. Perhaps Chatwood and Montgomery can share No. 5 duties since neither is putting together quality performances, though Montgomery isn't getting the paycheck that Chatwood is. Overall, Montgomery has easily been the better pitcher. Purely in terms of who deserves to stay in the rotation, it's Montgomery.

Are the Cubs done dealing?

They don't think so. Epstein said they'll work the phones right up until this Tuesday's deadline, looking for even more pitching. A lockdown lefty reliever would still be a nice addition as even if Montgomery moves back to the bullpen, he's not your classic "get one lefty out" kind of guy. Justin Wilson would be more suited for that, but he's too erratic. In any case, don't expect any bigger name than Hamels to become a Cub.