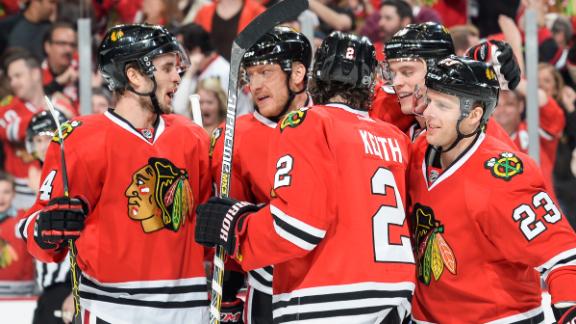 The Chicago Blackhawks and Nashville Predators have looked at times this season as if they were the teams to beat for the Stanley Cup.


The Blackhawks had a stretch in November and December when they went 16-3-1. On Feb, 25, the Predators were 41-13-7 and six points ahead of the league's next-best team. Neither team was a stranger to the top spot in ESPN.com's Power Rankings.


The problem for the Blackhawks and Predators is they've also looked very beatable. The Blackhawks have gone 25-19-4 since Jan. 1 and enter the playoffs having lost their past four games. The Predators went 6-12-3 in their final 21 games and closed the regular season on six-game losing streak.


As the two match up in the first round of the Stanley Cup playoffs, both are hoping they can turn their play around and resemble the dominant teams they were earlier in the season.


"They know how good they can play and they've been ready for the playoffs for such a long time, too," Blackhawks defenseman Niklas Hjalmarsson said on Saturday. "So, I think when it comes to when the puck drops against us, I think they're going to elevate their game exactly the way that we're thinking about doing."


The Blackhawks and Predators met four times in the regular season. The Blackhawks won three of those games, which included overtime and shootout wins, but there's not a whole lot of familiarity as of late. Their last regular-season game came on Dec. 29.


"We played pretty good against them this year," Predators defenseman Seth Jones told reporters on Saturday. "I think we had a shootout loss, OT loss maybe against them. For the most part, we played pretty good hockey. They're very dangerous offensively, obviously. They can make plays and make you pay if you turn the puck over. We've got to do a great job of managing pucks against them and just trying to work them down low and playing our game."


Fancy stats
The Blackhawks and Predators were two of the league's top possession teams this season, but that didn't always benefit them.


Gut check
As much as both teams would like to downplay it heading into the playoffs, it certainly does matter that Chicago and Nashville have not played well recently. Nothing about either team has screamed that either is building up for a successful playoff run.


Between the two, the Blackhawks have played slightly better. Their issue has been scoring enough goals, but they've been keeping them out for the most part. Their last four games of the season were all one-goal games. With Patrick Kane possibly on the verge of returning from his clavicle injury at some point in the first round, the Blackhawks could get the boost they're seeking offensively.


Both teams' goalies can steal wins, and that has to be taken in account. But if both continue to play as they have leading up to the playoffs, the Blackhawks get the slight edge.


MVP
The Blackhawks' Corey Crawford and the Predators' Pekka Rinne have given their teams a chance to win more often than most goalies in the league. A statistic to measure that is quality starts. It is defined as a goaltender recording a minimum .917 save percentage in a game, or allowing two or fewer goals with at least a .885 save percentage in a game.


Rinne finished the season first in the NHL (minimum 25 starts) with a .721 quality start percentage, and Crawford was third with a .696 percentage. Minnesota Wild netminderDevan Dubnyk was second with a .698 percentage.


One Blackhawk the Predators didn't see earlier in the season was rookie Teuvo Teravainen. He was in the AHL during their four previous meetings. Teravainen, who has been considered the Blackhawks' top prospect in recent years, has played mostly a fourth-line role in April, but he's been effective in it and has been able to create some offense. He had one goal, one assist and 12 shots on net and was a plus-6 in the last six games. He's also been given ice time on their top power-play unit lately.


The skinny
The Blackhawks likely wouldn't be favored to win the first round if they were playing almost any other team in the Western Conference, but the Predators just haven't been the same down the stretch. Blackhawks in 6.

Stanley Cup Playoffs: Central Division preview
Pierre LeBrun previews the stacked Central Division playoff bracket and asks if this is finally the Blues year and if someone will finally knock the Blackhawks out in the early rounds.