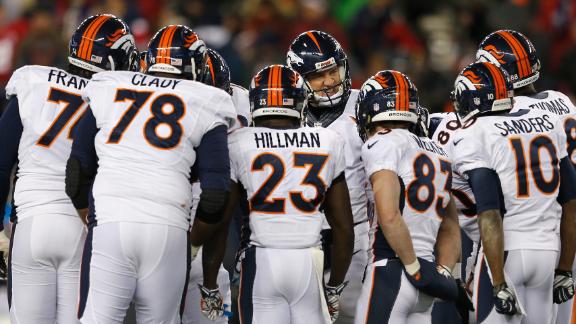 ENGLEWOOD, Colo. -- As an NFL head coach, Jeff Fisher has faced Peyton Manning 19 times, including one playoff game, and in all that preparation, he said Wednesday that the veteran quarterback looks even better this time around.

Manning and the Denver Broncos visit Fisher's St. Louis Rams on Sunday. It will be the first time Fisher has faced Manning since the quarterback signed with the Broncos in 2012, and Fisher returned to the sideline that same season.

"With all due respect to the Colts and that system, the system is completely different now," Fisher said on a conference call. "Everybody is moving around, as compared to Marvin [Harrison] playing on one side, Reggie [Wayne] on the other.

"This offense is completely different. They've done an outstanding job of putting outstanding players around him. I think this is the best cast of playmakers he's ever had, and obviously the results are showing that."

The Broncos have five players with at least 20 catches, with Demaryius Thomas and Emmanuel Sanders leading the way with 65 and 62, respectively. Tight end Julius Thomas leads the NFL with 12 touchdown catches.

In his tenure as Houston Oilers/Tennessee Titans coach, Fisher's teams faced Manning twice a season beginning in 2002. Manning is 13-6 as a starter in those games. (Two games in that span were end-of-the-regular-season affairs when Indianapolis' playoff spot was assured and Manning attempted seven and 17 passes, respectively.)

Fisher, whose playing and coaching roots are on defense, has tried all forms of coverage-rush combinations through the years. His staff in St. Louis also includes defensive coordinator Gregg Williams, assistant head coach Dave McGinnis and secondary coach Chuck Cecil, who were all also on Fisher's staff at times with the Titans.

"I can't remember a time when he was playing any better," Fisher said. "I think he's playing his best ball right now. He's got great people around him, he's really got a good feel, he's not going to take a sack, he's not going to make a bad decision. It's very, very difficult to defend."

Manning leads the NFL with 29 touchdown passes for the 7-2 Broncos and is on pace to become the first player in NFL history to throw for 50 touchdowns in back-to-back seasons. He is third in passing yards (2,912) and has been sacked fewer times (nine) than any other quarterback who has started all of his team's games.

"There may be a time when you can try to catch a double here or there, but it's not going to fool Peyton; he knows exactly where to go with the ball," Fisher said. "When you watch this offense and you watch it close, there is usually two, oftentimes three receivers that are open as an option. Peyton has options.

"You oftentimes wonder why he goes there instead of over here. Well, when he goes there, he makes the right decision, so they make a play. It is very difficult to blanket this offense and take things away and make him hold [the ball]."