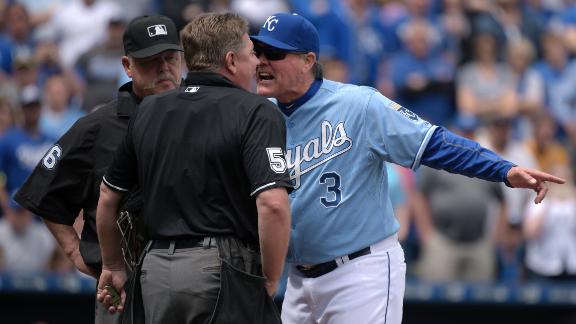 
The benches emptied for the third straight day after Royals reliever Kelvin Herrera threw a 100 mph fastball shoulder-high behind Brett Lawrie in the eighth inning.


Herrera was ejected, and pointed at his head as he left the field. Royals bench coach Don Wakamatsu and injured Royals shortstop Alcides Escobaralso were banished by plate umpire Greg Gibson.


Athletics closer Sean Doolittle, who is on the disabled list, took to Twitter to call out Herrera.


Herrera claimed his head-pointing motion was done to say "think about it."


"I don't mean to hurt anybody," Herrera said. "I was just trying to throw inside, but just a bad grip on that fastball. It started raining pretty good. And they just tossed me out of the game."


Royals manager Ned Yost was ejected in the first inning after Royals outfielderLorenzo Cain was hit by a pitch from Scott Kazmir.


Both teams were issued a warning by Gibson. Yost came out to argue and was immediately ejected, and pitching coach Dave Eiland also was tossed.


The Royals overcame the ejections to beat the A's 4-2 behind Kendrys Morales' tiebreaking two-run double in a three-run eighth inning.


Royals ace Yordano Ventura was ejected Saturday after hitting Lawrie with a pitch following Josh Reddick's home run. The dugouts and bullpens emptied, but no punches were thrown.


Lawrie's hard slide into Escobar injured the shortstop's knee Friday and caused the benches to clear.


Information from The Associated Press was used in this report.