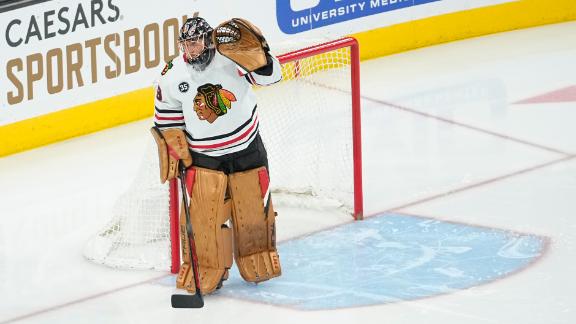 Fleury made 31 saves against his former team and the Chicago Blackhawks defeated the Vegas Golden Knights 2-1 on Saturday night to snap a six-game losing streak.


Jujhar Khaira and Riley Stillman scored for the Blackhawks, who were 0-3-3 during their skid.

"I think our team played well tonight," Fleury said. "I thought we defended well and obviously got a couple of big goals."

It was Fleury's first start against Vegas since being traded in the offseason, and first trip back into an arena he dominated during his four years with the Golden Knights. His strong play inside T-Mobile Arena continued Saturday, as he stopped 28 straight shots after Ben Hutton gave Vegas a 1-0 lead early.

Fleury stymied the league's third-highest scoring team to its lowest score in more than two months. It marked just the fourth time this season Vegas has been held to one goal or fewer. It was the Golden Knights' lowest scoring output since being shut out 4-0 in Toronto on Nov. 2.

"I wish there was no goals, (would have) been better," Fleury said.

The game's three goal scorers had combined for two goals entering the game, and Khaira had both of them.

Fleury, who was with Vegas for its first four seasons in the league, is 9-4-2 over his last 15 games after starting the season with one win in his first eight appearances.

The 18-year veteran and three-time Stanley Cup champion was greeted by a tribute video before the game, which sent the announced crowd of 18,367 into a frenzy.


"I still think (the pregame video is) better than mid-game," Fleury said. "I talked to (former Knight and New York Ranger Ryan Reaves) after last game he was here and he said how hard it was after he saw the video. It was good to get it out of the way quick. Obviously, it's just a few images and videos, but a lot of memories come through seeing that. I was really fortunate to have a great time here in Vegas."

Hutton helped settle Fleury's jitters in the first period, with his first goal of the season when he gathered the puck off a faceoff and fired it perfectly over Fleury's right shoulder into the upper left corner of the goal just 5:17 into the game.

It was all Vegas would get against its former netminder.

"We kept them to the outside, and we forced them to make lateral plays instead of shooting, and we were blocking some shots," Chicago interim coach Derek King said. "Guys were getting in lanes, forcing bad pucks. ... When we do that, we give ourselves a chance."

Robin Lehner made 19 saves for the Golden Knights, who have lost three of their last four - all at home.

Despite the loss, the Golden Knights remained four points ahead of second-place Anaheim in the Pacific Division, as the Ducks lost to the Rangers 4-1.

"We got to get our energy levels back up," Vegas coach Peter DeBoer said. "I thought we ran a little dry tonight. The two disappointing games during the homestand were the Nashville game and tonight. I'm not pressing the panic button. I like our group."


The Blackhawks tied it when Khaira shagged the puck off a bank pass, skated into the zone and fired a wrist shot far side and under Lehner's right arm at 4:38 of the second.

Chicago took the lead when Stillman's shot from the top caromed off Vegas center Brett Howden's knee and into the net with 5:39 remaining in the middle period.

Game notes
Vegas F William Carrier suffered an upper-body injury and did not return. ... Golden Knights D Shea Theodore is one game shy of playing in his 300th with Vegas.

Blackhawks: At Columbus on Tuesday night.