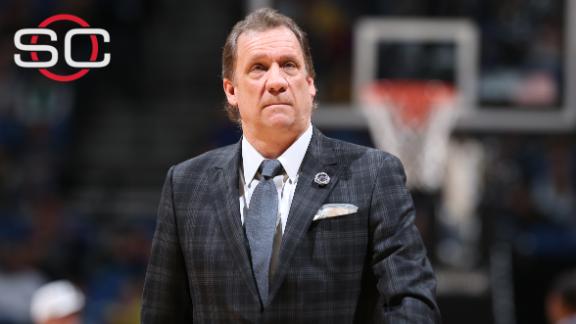 ESPN
MINNEAPOLIS -- Flip Saunders has been hospitalized for testing and treatment following a setback in his fight with cancer, leaving his leadership roles with the Minnesota Timberwolves indefinitely to focus on his health.

The Timberwolves confirmed Friday that assistant Sam Mitchell will take over as interim coach for Saunders, who is also the president of basketball operations. General manager Milt Newton's responsibilities also will expand with the absence of the 60-year-old Saunders, who was diagnosed this summer with Hodgkin lymphoma.

Timberwolves chief executive Rob Moor, citing the desire for privacy for Saunders and his family, declined to speak specifically about Saunders' condition during a news conference. The team said Saunders recently experienced complications from chemotherapy treatments.

"Our first priority is making sure Flip regains his strength and is back to 100 percent before he is back to work," Moor said. "And while there is no timetable for Flip's return, we believe it will be measured in months, and not weeks. To attempt to place a timeline on things at this time would be unfair to the due process of recovery."

"We have complete confidence in the abilities of Milt and Sam. Flip hand-picked these two professional gentlemen exactly for this reason," Moor said.

The Timberwolves issued a statement from the Saunders family expressing gratitude for his medical team and appreciation of the support from family, friends, colleagues and fans.

"We are fully committed to Flip's long-term health and look forward to him returning to his Timberwolves responsibilities at the appropriate time," the statement said.

Owner Glen Taylor told team executives not to try to speak with Saunders for now.

"We've been in touch to be supportive, but you know Flip: He's going to want to talk about team stuff. So we have not spoken to him," Moor said.

Saunders was diagnosed with the cancer of the immune system in June. He announced his condition in August, when he said his doctors called his prognosis "very treatable and curable." Saunders, who is also part owner of the franchise, hoped then to be ready to resume his responsibilities when training camp cranked up.

Mitchell and Newton repeatedly said they were focused on keeping their up-and-coming team running smoothly out of loyalty to Saunders. If they've been emotionally shaken by this recent turn, they kept that hidden Friday.

"I think Flip would be disappointed if we were not up to the task," Newton said, adding: "We would go about our day-to-day jobs as if Flip was here, because we know what the vision is. We're all in tune with that, and that's our goal to take things forward with Flip's presence or with his absence."

Saunders returned to the Timberwolves as team president in 2013. Last year, he replaced the retired Rick Adelman on the bench and the team finished 16-66.

Mitchell coached the Toronto Raptors for just over four seasons from 2004-08, leading them to the playoffs twice and winning the NBA Coach of the Year award for 2006-07. He was fired 17 games into the 2008-09 season. Mitchell's last seven years as a player in the league were with the Timberwolves under Saunders.

Saunders brought Mitchell to Minnesota for his head-coaching experience and to add some toughness to a staff developing a young core that includes Andrew Wiggins, Zach LaVine and Shabazz Muhammad. Mitchell's close relationship with Kevin Garnett, who returned to Minnesota in a February trade with the Brooklyn Nets, should help ease his transition back to the head-coaching job.

"Out of respect, you don't want to step in under these circumstances, but, you know, Flip brought us here for a reason," Mitchell said.

The return of Garnettought to pay off now more than initially envisioned, with the 39-year-old's ability to serve as a liaison of sorts between the young players and the new boss Mitchell. Moor mentioned the night of Garnett's first home game after the trade, an exhilarating atmosphere that was by far the highlight of last season.

"After the game, Flip could have sort of basked in the glory of having made that happen. He sent out an email to all staff thanking them for all the work they did to allow that game to happen," Moor said. "So I fully expect that we'll get thanked soon for all the work that Milt and Sam are going to do going forward."