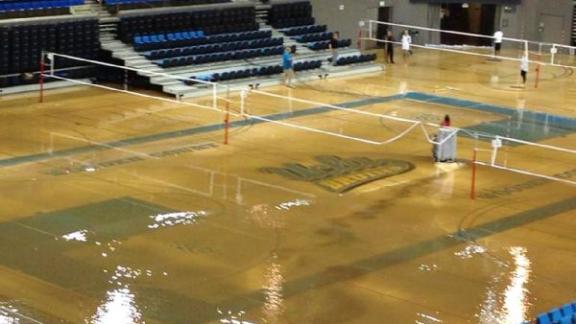 A massive water main break that flooded parts of UCLA's campus, including Pauley Pavilion, threatened to ruin the Bruins' home floor and do similar damage to other buildings Tuesday.

Pauley Pavilion, UCLA basketball's historic home, underwent a three-year, $136 million renovation that was completed in 2012. The project added more than 70,000 square feet in additional space that essentially turned the facility into a new building.

But the water main break poured water into the building and onto the court, which resulted in several inches of end-to-end standing water.

UCLA athletic director Dan Guerrero, in a text message to ESPN.com's Andy Katz, said staff would work to clear the court of water Tuesday night and would reassess its condition Wednesday.

"I'm confident we will play at home this season," Guerrero said.

The surface of the school's track and field venue also was partially submerged.

The flooding, prompted by a water main break that shot 30 feet into the air at its peak, began near the Sunset Boulevard and Westwood Plaza intersection just after 4 p.m. local time, according to a university website. Four hours later, the break had been shut off completely, local media reported, citing city officials.

Los Angeles officials said Wednesday that it could take several days to repair the nearly century-old pipe, which spewed some 8 million gallons of water.

The Department of Water and Power's Jeff Bray said Wednesday that a number of valves are still leaking water into the ruptured 30-inch pipe. He says the complex repair operation cannot begin until the pipe is completely drained.

School spokesman Phil Hampton told ESPN.com via email that he was "not aware of injuries" related to the water main break.

Photos posted to social media helped reveal the potential damage. The Pauley Pavilion court, set up for volleyball, was soaked. Water ran down the steps outside the arena. UCLA basketball staffers were attempting to salvage what they could from the locker room.

UCLA men's basketball coach Steve Alford was in Florida with his family, but athletic department staffers were checking on student-athletes to make sure they were safe.

Workers used sandbags to try to stop the water from flowing into Pauley Pavilion as the sudden rush caused campus officials to scramble their resources. Water reached other buildings around campus, including UCLA's Athletic Hall of Fame, while some parking ramps were closed.

ESPN.com's Jeff Goodman and The Associated Press contributed to this report.