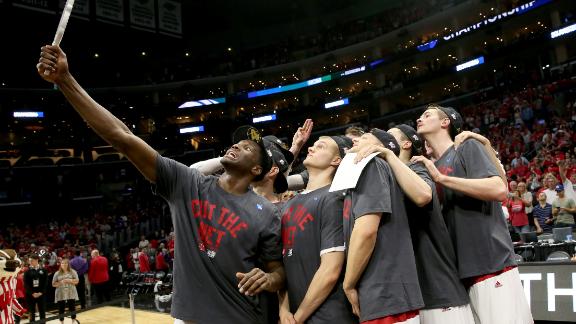 INDIANAPOLIS -- Frank Kaminsky, the 7-footer who anchoredWisconsin'srun to a second straight Final Four, andKentuckycoach John Calipari, who is seeking the first undefeated season since 1976, were the runawaychoices for The Associated Press player and coach of the year on Friday.

Kaminsky averaged 18.7 points and 8.0 rebounds while shooting 54.9 percent from the field and 41.5 percent from 3-point range as the Badgers ran up a 35-3 record and won the Big Ten regular-season and tournament titles.


Kaminsky on Friday also received the Oscar Robertson Trophy for winning Player of the Year honors from the U.S. Basketball Writers Association.


"Frank the Tank" is the first Wisconsin player to win the AP's award, which started in 1961. He is the third from the Big Ten in the past six seasons, joining Ohio State's Evan Turner in 2010 and Michigan's Trey Burke in 2013.

Calipari received 40 votes as the Wildcats, the first team in 24 years to reach the Final Four without a loss, were the talk of the college basketball this season in winning the SEC regular-season and tournament championships.


Many thought Kentucky had so much talent that it would be hard to instill a team-first attitude. Calipari started the season with two five-man units he substituted in groups. It worked well enough that eight players in the rotation are averaging between 5.6 and 11.0 points a game.


Tony Bennett of Virginia was second with nine votes, while Mike Brey of Notre Dame got five.

Wisconsin loose entering Final Four
Wisconsin forward Nigel Hayes talks about the Badgers' camaraderie and the lack of pressure they feel as the Final Four approaches.