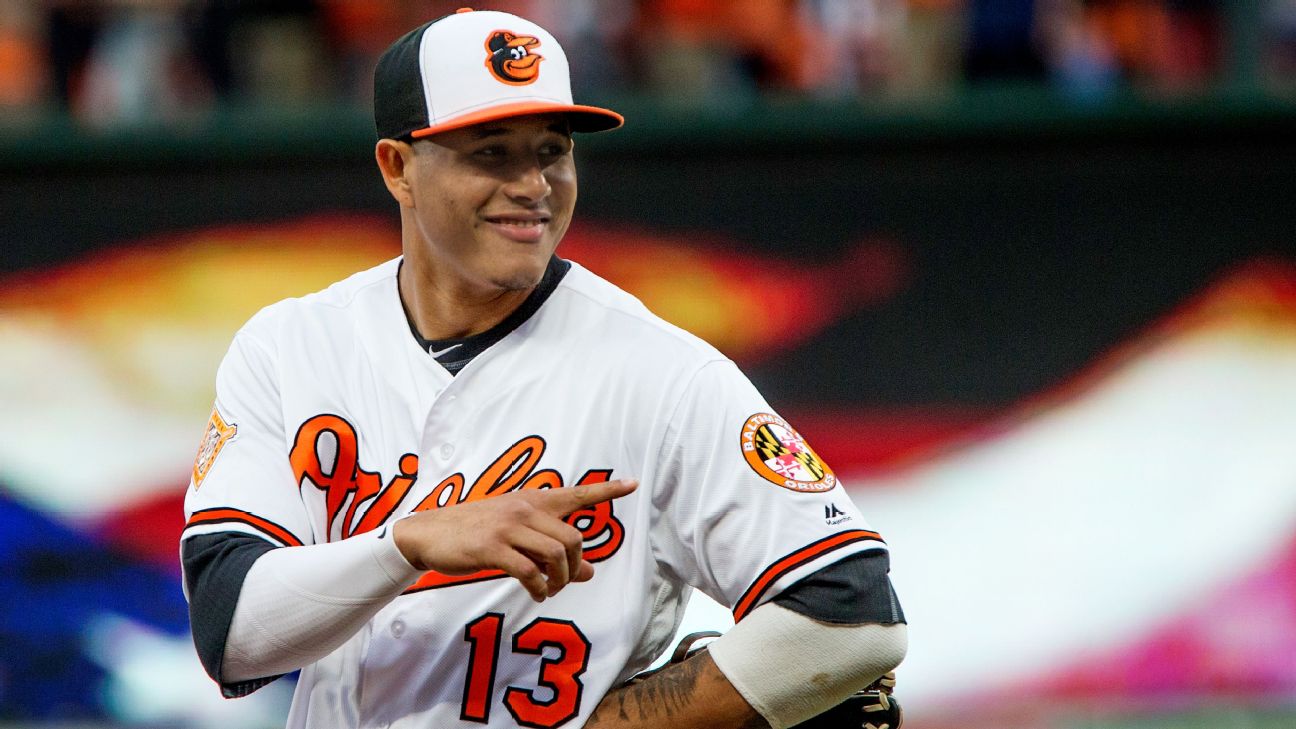 CHICAGO -- Manny Machado and Albert Almora Jr.played together in the backyard when they were kids, dreaming about winning a World Series together.

As far as what effect Almora's presence on the Chicago Cubs might have on Machado's situation, well, the star of the show is guarding his cards quite closely at the moment.

Manny Watch 2018 arrived in Chicago on Monday, and the slick-fielding slugger handled the attention like a routine ground ball. The 25-year-old Machado is eligible for free agency after this season and could well be traded by Baltimore this summer, but he is determined to keep the focus on the field for as long as he can.

"I go out there and play baseball. I'm not getting distracted by any of this," said Machado, dressed in a Gucci wool cardigan adorned with tiger heads. "All these talks, rumors, they're all rumors and talks. At the end of the day I got to go out there and perform and win games for this ballclub. We're trying to make a push for things and we're a little behind, but we've got to keep pushing forward."

Baltimore hasn't presented much of a push so far, and time is running out when it comes to keeping Machado. The Orioles had dropped four of five heading into Monday's game against theWhite Sox, and they are looking up at the rest of the loaded American League East.

While Baltimore is off to a tough start, Machado remains one of baseball's best players. The three-time All-Star hit a screaming line drive to left for his 15th homer in the fourth inning against the White Sox. The Orioles were leading 3-1 when he was intentionally walked with one out and no one on in the sixth.

"He's a special talent, and he's really become such an all-around teammate, everything," Orioles manager Buck Showalter said. "He's really reached a level of maturity that has been fun to watch. See him as kind of a puppy years ago, so to speak, believe me he's on the front porch now with the rest of the big dogs."

But Showalter can see the whole picture.

If Baltimore decides to deal Machado, the crosstown Cubs could get involved in what likely will be a tricky market. While Machado will be a tantalizing option for several contenders, it's unlikely that the two-time Gold Glove winner would agree to a new contract so close to free agency, raising the possibility of parting with a couple young players for just a few months of Machado.

The Cubs might have some insight on what he might do in free agency because of Almora, but Machado said he hasn't talked to him about life with the 2016 World Series champions.

"Haven't talked about any of that," Machado said. "He loves the team and he got a ring before I did. So that's about it."

Forget about his impressions of the Windy City, too.

"To be honest, nothing. I go from my room to the ballpark and play baseball," he said. "I try to keep it simple."

It's hard to imagine the lowly White Sox dipping into their treasure trove of prospects to bring in Machado before he becomes a free agent, but they could make a play for him if he hits the open market. They reportedly expressed interest in him last winter as a way to jump-start their rebuilding project.

"He's an awesome player and an awesome person," said White Sox catcher Welington Castillo, who played alongside Machado last season with the Orioles. "I think that's why everybody is talking about him. Everybody sees because he's been showing them every year, what he can do."