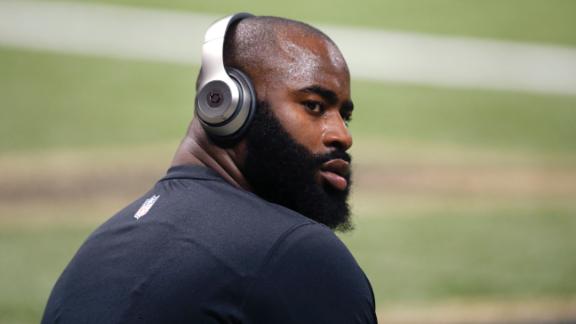 METAIRIE, La. -- New Orleans Saints linebacker Junior Galette was arrested on a misdemeanor charge of simple battery involving domestic violence for allegedly pushing a woman to the ground while trying to get her to leave his home, police said Monday in a news conference.

Galette, 26, was arrested and taken into custody after the disturbance at his home Monday shortly before 10 a.m. ET. An acquaintance, described as Galette's cousin, Terrance Banks Jr., was also booked on a misdemeanor simple battery charge after the incident.

Saints spokesman Greg Bensel said the team is aware of the arrest and is collecting information. NFL spokesman Greg Aiello also said the league is looking into the matter.

Galette was released on $600 bond later Monday. He could face a six-game suspension as a first-time offender in the NFL's revamped personal conduct policy, although it's still too early in the investigative process to determine whether punishment will be warranted.

According to police in Kenner, Louisiana, there were differing accounts of Galette's relationship with the 22-year-old woman. She said that she used to stay with Galette and has continued to do things such as cook and clean for him during the past two years. Galette described her as a dancer who was supposed to leave the night before but was allowed to stay until the morning.

The woman called police to the scene and had visible injuries when they arrived, including bleeding from her ear after an earring had been ripped out and scratches on her face, police said.

She alleged that an argument ensued after she woke up and Galette and Banks refused to give her cab money and told her to leave. She alleged that Galette pushed her twice while trying to get her out of the house, then after she fell, both men were "on me" and she couldn't breathe. She told police that Banks then picked her up and took her out of the house, taking her phone away as she tried to dial 911.

According to police, she picked up a knife because she was afraid of being "jumped" again. When Galette began recording a video of her, she threw the knife down and Banks again picked her up and took her and her possessions outside. Investigators are seeking a search warrant to search the video on the phone.

Kenner police said that Galette, who is disputing the woman's account, was verbally combative, calling at least one officer a name while being arrested, but he otherwise cooperated.

According to Kenner police, arrests are automatic when there are visible injuries in the case of domestic violence claims.

The baseline suspension for first offenses is now six games without pay, though the policy says consideration will be given to "any aggravating or mitigating factors." Players still can be subject to discipline even if their cases don't result in criminal convictions, if they are found to have engaged in certain conduct. As part of the new policy, a second offense will result in permanent banishment from the NFL.

The new policy embraces the use of independent NFL investigations, and includes a provision of leave with pay. It's unclear if that could be the case in Galette's situation.

Galette mentioned something about how a domestic violence charge could affect his contract, according to police spokesman Lt. Brian McGregor. He is due to receive a fully guaranteed roster bonus of $12.5 million on the third day of the new league year in March. His base salary of $1.25 million is also scheduled to go from an injury-only guarantee to fully guaranteed at that time.

Galette, who finished this past season with 10 sacks and was voted a team captain for the first time, has been with New Orleans since 2010, when he signed as an undrafted free agent out of Stillman College. He developed into a top pass-rusher and signed a four-year, $41.5 million contract extension with the team in September that runs through the 2019 season.

Galette began his college career at Temple but was dismissed after he said a cousin was arrested for stealing laptop computers from the dorm while staying with Galette. In the past, Galette explained his trouble at Temple as a series of "boneheaded mistakes," including personality clashes with coaches.