Game to beware for each Top 25 college football team 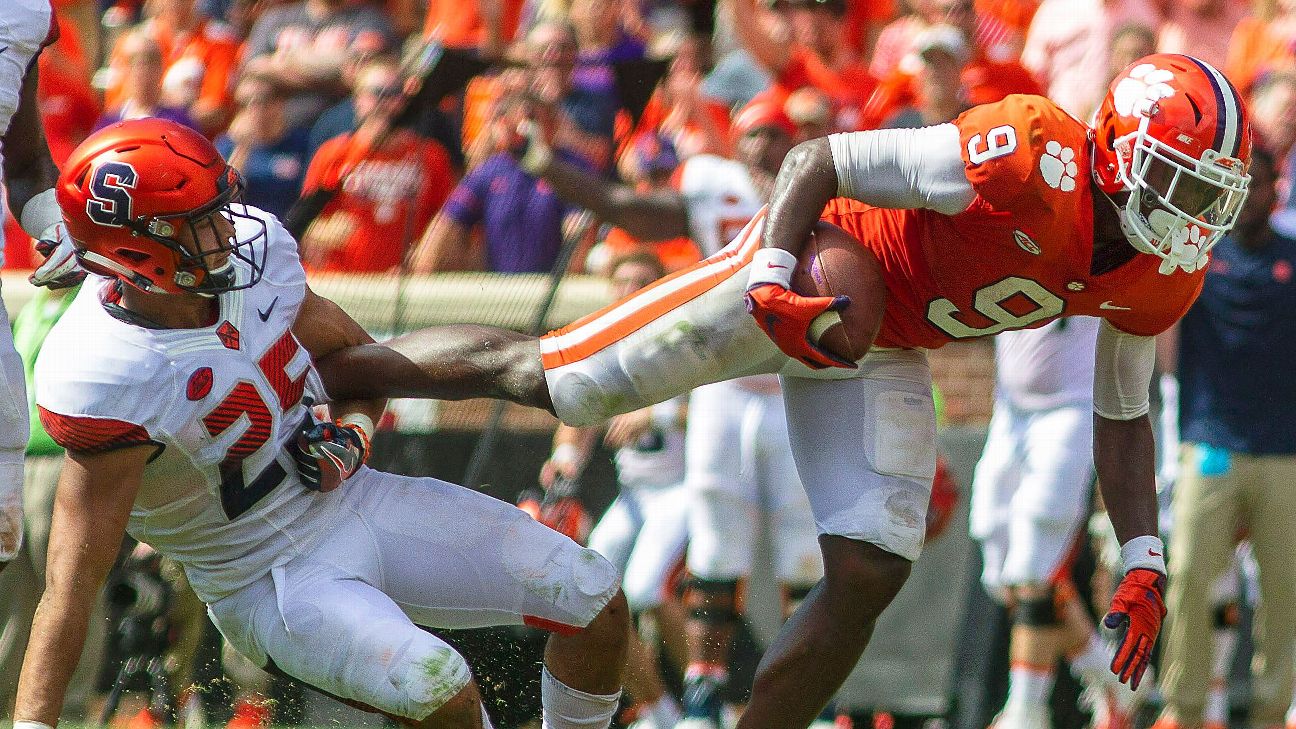 It happens every year: top-25 teams get tripped up and fall out of playoff contention.

Whether potential trap games or tough tests on the road, here are contests that each team in our post-spring power rankings, from Clemson to Mississippi State, should watch out for.

There's no doubt Syracuse will have the Tigers' full attention this year. First, Syracuse is likely Clemson's biggest competition in the ACC, with the schedule looking particularly weak this year. Second, the Orange came inches away from knocking off Clemson in Death Valley a year ago. But, of course, the biggest reason is what happened the last time Clemson went to the Carrier Dome, as it will in Week 3. Syracuse, which would win just four games in 2017, pulled off one of the most stunning upsets of the year. -- David M. Hale

It's going to be easy to get lulled to sleep early on with an opener against Duke followed by New Mexico State. But Alabama shouldn't overlook South Carolina during an otherwise ho-hum four-game stretch to start the season that ends with Southern Miss. A massive road trip to Texas A&M in Week 5 will be circled on everyone's calendar. But beware: the last time the Crimson Tide played the Gamecocks, it didn't end well, as then-No. 1-ranked Alabama lost convincingly, 35-21. -- Alex Scarborough

The Bulldogs might be feeling pretty good about themselves heading into an Oct. 5 trip to Tennessee. Assuming they handle their business against Vanderbilt, Murray State and Arkansas State, and assuming they win a tough nonconference game against Notre Dame, they'll likely be ranked in the top three. But coming out of that stretch and the bye week that follows could have Kirby Smart's squad feeling too good about themselves. Though it's going to be easy to overlook Tennessee, which Georgia beat 38-12 last season, don't discount the motivation that loss will provide Jeremy Pruitt's upstart Vols, who return their starting quarterback Jarrett Guarantano. -- Scarborough

The Sooners have handled Baylor in recent years. Bears QB Charlie Brewer, however, threw for 400 yards in Norman last season. With Brewer back, Baylor should be improved in 2019. And the Bears will be catching OU in Waco, in between its tough games vs. Iowa State and TCU. -- Jake Trotter

Are the Bearcats the toughest team on Ohio State's schedule? No. But former Buckeye Luke Fickell will still have more head-coaching appearances in the Horseshoe than Ryan Day when this game kicks off. Fickell will be bringing a very solid group with him to try to upset a young Ohio State team that has a lot to figure out before this legitimate test early in September. -- Dan Murphy

Brian Kelly is certain his Fighting Irish can sustain the success they had last season on a regular basis. He will get a chance to prove it before the end of September this year. Notre Dame's first-ever trip between the hedges will likely determine if it remains in playoff discussions for most of the season or bows out early. -- Murphy

A revamped offense gets its first major test, against the Badgers' defense on the road in Madison. The true season-defining games won't come for the Wolverines until they face rivals later in the year, but if you're looking for a slightly different Saturday to circle on the calendar, this one will either rev up the hype machine again or create cause for concern. -- Murphy

There are a few games on the schedule this season that qualify, including the opener against Miami. But the Gators' first road trip, at Kentucky on Sept. 14, sticks out for obvious reasons. Without a doubt, Florida is going to be fired up to avenge its home loss to the Wildcats a year ago. Motivation should not be an issue, but Kentucky has played Florida tough over the past several seasons. Now the Wildcats know they can win (and win convincingly). And oh, by the way, Florida gets Tennessee the following week. -- Andrea Adelson

Georgia Southern is just the tune-up. The real test comes Week 2 on the road at Texas. Going into that environment, with an entire fan base anxious to shout "Texas is back!" and actually mean it, will be tough for LSU to handle. Granted, Ed Orgeron returns his starting quarterback, Joe Burrow, along with most of the offense, but his defense, without a few of its key playmakers, should give him pause. Though the return of star safety Grant Delpit is huge, there's going to be a void in the shape of inside linebacker Devin White and cornerback Greedy Williams. -- Scarborough

The Ducks head to Seattle to face Washington on Oct. 19 for a game that will go a long way toward determining the Pac-12 North. But the week prior, Oregon will host a Colorado team that's under new leadership. No one knows what shape the Buffs will be in this fall, but they'll likely be playing with house money for most of year. Seeing them right before such a huge game could impact the Ducks' midseason focus. -- Edward Aschoff

The Longhorns have an opportunity to make a statement through the first half of the season, with showdowns against LSU and Oklahoma. But an opener against Louisiana Tech could prove tricky. The Longhorns will be introducing several new defensive starters against a feisty Louisiana Tech program that has won bowl games the past five years. -- Trotter

Let's not overthink this one. It's a Week 2 trip to Clemson that will set the tone in Year 2 for Jimbo Fisher. His Aggies handled themselves well at home against the Tigers last season, nearly upsetting the future national champs, but this game will be different. They won't surprise Dabo Swinney's squad this time around. There's a lot of buzz about how quarterback Kellen Mond will improve after a full season in Fisher's system, and this will be his proving ground. -- Scarborough

New Terrapins coach Mike Locksley wants to challenge Penn State right away in recruiting and on the field. There's no better opening statement than to shock the Nittany Lions in the Big Ten opener. Friday night road games are tricky, and last year Penn State trailed Illinois in the third quarter before scoring 42 unanswered points. Maryland has Anthony McFarland and other talented pieces and could make things tricky for new PSU quarterback Sean Clifford. -- Adam Rittenberg

In the case of UCF, all anyone wants to talk about is the nonconference schedule -- especially as it relates to any College Football Playoff chatter and another possible undefeated season. This year, UCF travels to Florida Atlantic, hosts Stanford and then goes to Pitt in consecutive weeks. UCF beat the Owls and Panthers handily a season ago, but those games were at home. Stanford will likely be the toughest test because the Cardinal is projected to be the best opponent UCF will play. A loss in any of these games, though, and the Knights face a steep climb for another New Year's Six game. -- Adelson

When you're in rebuilding mode on defense, road games can always be tricky. So if you're the Huskies, don't sleep on the Sept. 21 trip to BYU. It comes a week before the USC game, and the Cougars will be playing with a major sense of urgency after last year's 7-6 season. BYU also returns 14 starters, including eight on offense. -- Aschoff

It can be tough to label conference opponents as trap opponents, but that Cal game on Oct. 26 could be a tricky one for the Utes. Utah will challenge for the top spot in the Pac-12 South and will have a tough game against Arizona State the week before Cal and an even tougher game at Washington the week after. Cal isn't a top team in the league, and it would be natural for the Utes to overlook the Bears. -- Aschoff

After playing back-to-back road games against USC and UCF, and then a home game against Pac-12 favorite Oregon, the Cardinal will have to travel to Oregon State before hosting Washington. There's no doubt the Cardinal will be drained in Corvallis and could be looking ahead to that huge matchup with the Huskies a week later. -- Aschoff

There's no need to look past the opener against Oregon. Yes, it's a neutral site game. And, no, it won't impact the SEC standings. But don't think for a minute that this isn't a pivotal game. Not when you consider how hot the seat is for coach Gus Malzahn. And not when you consider that the Tigers will be breaking in a new quarterback who is a true freshman (Bo Nix). If the Tigers are in for a bounce-back season, it needs to start right away. -- Scarborough

Look, when you've lost to multiple FCS teams in recent history, I'm going to worry when another one pops up on the schedule. The home game Sept. 7 against Northern Colorado shouldn't scare anyone -- especially with five wins on its resume the past two seasons -- but Wazzu has been here before. The Cougs are breaking in another new quarterback and hit the road to play Houston the week after. Weirder things have happened. -- Aschoff

The Huskers will be emerging from a potentially season-defining stretch against Ohio State (home), Northwestern (home) and Minnesota (road). After Indiana's visit, Nebraska returns to West division play with key games against Purdue (road) and Wisconsin (home). Nebraska will be better in Year 2 under Scott Frost, but it cannot overlook any opponent, including an Indiana team with offensive threats like running back Stevie Scott and a talented new coordinator in Kalen DeBoer. -- Rittenberg

I considered picking the opener at South Florida, but after an uncharacteristically average 2018 season, Wisconsin should be ready. The Purdue game, meanwhile, falls after a three-week stretch featuring Ohio State (road), Iowa (home) and Nebraska (road). Though Jeff Brohm's Boilers are improving, Wisconsin has completely owned this series, especially at home. Wisconsin has won 13 straight, nine by 17 points or more, although the last two were decided by single digits. Purdue is due, so Badgers beware. -- Rittenberg

A Week 2 trip to Maryland has serious trap-game potential. No, Maryland doesn't figure to be Syracuse's toughest test, but a road date early in the season against a Terps team with something to prove always sets up as a potential problem. But it'd be hard to blame the Orange for looking ahead a bit, too. A date with Clemson that could determine the ACC Atlantic awaits in Week 3. Dino Babers will have his work cut out for him keeping all eyes on Maryland. -- Hale

Iowa State was a nonstarter, in case you wondered, as the Cy-Hawk game could feature two ranked teams. Two weeks later, Iowa returns to action against a team it should beat but one that has recorded just one losing regular season since 2008. Open weeks often create sluggishness, and Iowa until recently would always struggle in one non-league home game. Michigan and Penn State loom after this one, but Iowa shouldn't look past the Blue Raiders. -- Rittenberg

The Black Knights are coming off back-to-back 10-win seasons for the first time in school history and boast a squad capable of making it three in a row. But to get there, they can't have any slip-ups. And a road trip to balmy Hawaii on Nov. 30 could challenge Army's focus, especially with the Navy rivalry on deck. -- Trotter