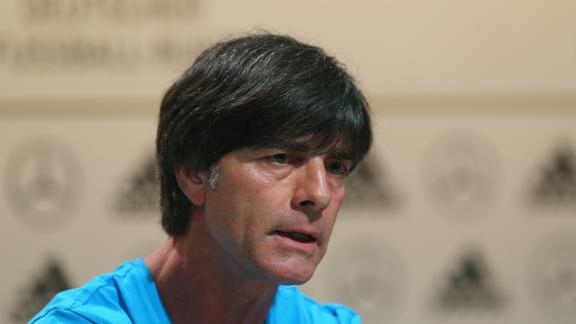 Germany's preparations for their 2014 World Cup opener against Portugal have focused on stopping Cristiano Ronaldo, Joachim Low has revealed.

The Portugal captain is also his country's all-time record goal scorer and played a central role in their qualification for the tournament by scoring times in two games in the World Cup playoffs against Sweden.

Although knee and thigh problems have hampered Ronaldo's chances of game time ahead of the World Cup, the Germany coach believes stopping him is key to Germany's success in the Group G opener.

Low said: "You have to be on alert when playing him. When he sprints with the ball, you can never totally control him. He is a player who scores 50 goals in the league.

"He has the best run paths there are, creeps into the dead angle, gets blind passes from his teammates. You are never allowed to lose sight on him. Whoever plays him must know where Ronaldo is, what he does all the time."

Jerome Boateng is seen as a candidate to try and stop Ronaldo on Monday. The Bayern Munich defender has already played at right back when Germany beat Portugal 1-0 at the 2012 European Championships.

But the former Manchester City player insists it is the responsibility of the whole team to try and stop a player of such talent.

"I played at right back in the tests against Cameroon and Armenia. The Bundestrainer knows that I'd rather play in the middle, but if he's convinced that I can help the team on the side, I will certainly play there," Boateng told Bild.

"I know that I won't be able to take out Ronaldo for the full 90 minutes. No defender can do that. It takes a team effort to do that. We need to narrow the spaces, and already stop the passes to him. We should not allow him to swerve and don't leave him a lot of space.

"I have played against him with FC Bayern quite a few times, and also know him from the European Championships. We also get video footage from our scouts. I will not sit in my room and watch Ronaldo videos for five hours every day."