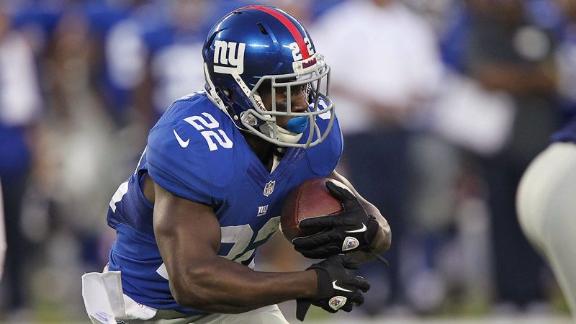 "The doctor told me I was good to go," Wilson said Monday evening at the Giants' practice facility here. "The last words he said to me were, 'Have a good season, stay healthy.' "

Wilson missed the final 11 games of the 2013 season after injuring his neck in the Week 5 loss to the Eagles and had surgery to repair the injury in January.

He was able to participate in some of the team's spring practices, but he was held out of anything that might expose him to contact until the doctors gave him the go-ahead.

Giants coach Tom Coughlin said Wilson would be eased into action, but Wilson himself appears more than ready to practice in full once the team begins training camp in earnest Tuesday.

"No real concerns," Wilson said. "I'm just excited, ready to get back out there and compete. I love competition, so I haven't been sitting on the coach. As I came out here and got started, I knew my appointment was this day and training camp was the next day, so I prepared. Now I just want to go out there and have fun."

The Giants were prepared in case Wilson didn't get clearance. They signed free-agent running backs Rashad Jennings and Peyton Hillis, drafted Boston College's Andre Williams in the fourth round and bring back 2013 seventh-rounder Michael Cox.

But Wilson offers speed and a big-play ability that's rare, and the Giants were always hopeful they'd get a chance to work him into their backfield mix under new offensive coordinator Ben McAdoo.

"He's a special athlete who's got a lot of great skills, and we've got to figure out a way to get the ball in his hands and let him make plays for us," quarterback Eli Manning said.

The Giants drafted Wilson in the first round in 2012. He was a minimal factor in their offense as a rookie as he struggled to pick up the pass-protection schemes. But he was an electrifying kick returner and the Giants hoped they could count on him as a starting running back last year.

But he fumbled twice in a season-opening loss to the Cowboys and got benched until he corrected issues with the way he was carrying the ball. Once those issues got worked out and they started trusting him again, he injured his neck, and 2013 ended up being a lost season.

"I think the fans really want to see me prosper this year, and my teammates as well," Wilson said. "I've been waiting for that, and I think now it's time. Coming off injury and missing all those games, I'm definitely anxious to get out there and score some touchdowns and have fun and win games with my team."