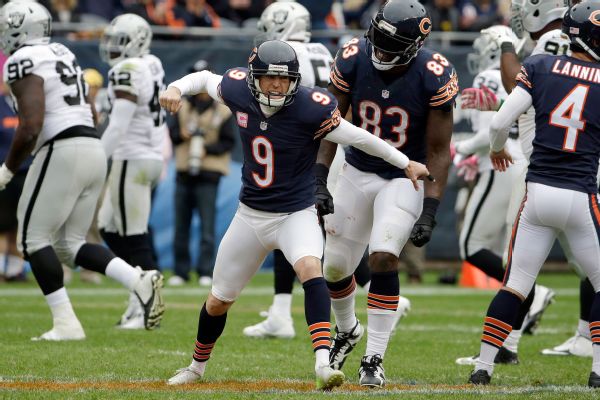 Gould will sign a one-year deal with the Giants, a source toldMortensen.

KickerJosh Brown did not travel to England after the Giants said they would review newly released documents in which Brown admitted to domestic abuse. The Giants will revisit the issue when the team returns, and the NFL announced it will review the documents.

Gould, who was the longest-tenured player on the Bears' roster, was the ninth-most accurate kicker in league history. He also owns the NFL's third-best field goal percentage from 50 yards or longer.

Gould, who entered the NFL as an undrafted free agent with the New England Patriots, was named an All-Pro in 2006, helping the Bears on their march to Super Bowl XLI with a game-winning field goal in overtime against Seattle in the NFC divisional playoffs. Gould has 12 game-winning kicks in his 11-year career.

However, Gould suffered through a frustrating 2015 season. Although he connected on 33 of 39 field goals attempts (84.6 percent), Gould hit a bumpy stretch late in the year, when he went a combined 2-for-5 in gut-wrenching losses to San Francisco and Washington.

Determined to bounce back, Gould embarked on a new training and nutritional regimen in the offseason and reported to camp at a heavier weight after he gained muscle mass. While Gould went 5-for-6 on field goals in the preseason, he failed to convert two PATs in the Bears' preseason finale at Cleveland.