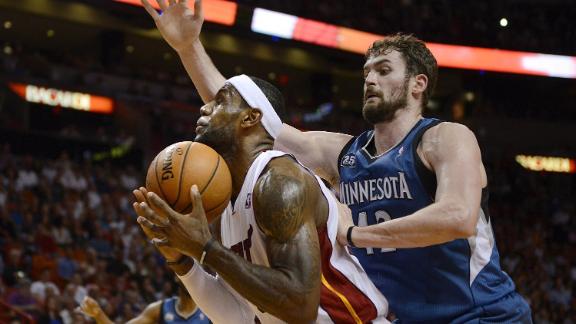 In the latest signal that a Kevin Love deal to Cleveland is inevitable, Timberwolves owner Glen Taylor told the St. Paul Pioneer Press that a trade of the All-Star forward is "likely" by Aug. 23 or Aug. 24.

Aug. 23 happens to be the first day Cavaliers rookie Andrew Wiggins is eligible to be traded.

Cleveland signed Wiggins to a four-year deal on July 24, but because of league rules on rookie deals, the Cavs are not able to trade him for at least 30 days.

"I'm saying it's most likely because Kevin has made it pretty clear that that's what he wants to do," Taylor told the Pioneer Press, adding that his preference is to keep Love in Minnesota.

ESPN.com's Marc Stein and Brian Windhorst reported Thursday that a trade sending Love to the Cavaliers for Wiggins, 2013 No. 1 overall pick Anthony Bennett and a future first-round pick is widely regarded around the league as a "when" not "if" transaction, with sources saying the Wolves and Cavaliers continue to discuss the prospect of bringing a third team such as Philadelphia into the trade.

Stein also reported this week that the Wolves have targeted Sixers power forward Thaddeus Young as a potential replacement for Love.

"I think when you move somebody like Kevin, who's been an All-Star, that you've got to get a number of players on your team that have the potential of replacing him," Taylor told the Pioneer Press. "Flip [Saunders, Wolves president and coach] has looked at this team and offensively, he's got a pretty good team. Defensively, it's got to be better, so I think that's where some of the areas will be replaced."

NBA officials are adamant there can be no acknowledgement of a trade, from either the Wolves or the Cavaliers, until the 30 days pass from Wiggins' signing.

Although Love, 25, is expected to opt for free agency after next season even if he's dealt to Cleveland, sources say that's purely because he can secure a far more lucrative contract next summer than he could going the extension route.

Sources told ESPN.com earlier this month that Love is highly intrigued by the idea of playing alongside Olympic teammate LeBron James on a full-time basis and is not put off by the fact that James' new contract with the Cavs spans only two seasons and includes a player option to return to free agency next summer.