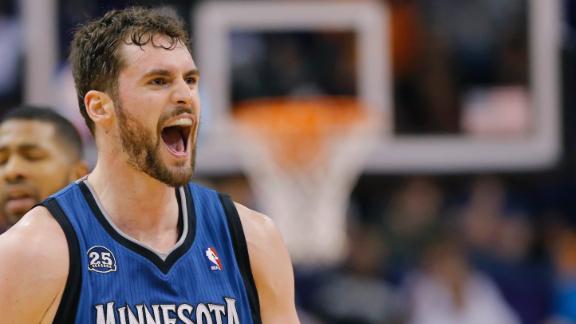 Minnesota Timberwolves owner Glen Taylor has reiterated his desire to retain Kevin Love, saying in a recent interview that he doesn't want to trade the All-Star forward.

Love, who can become a free agent after the 2014-15 season, has been pursued by the Golden State Warriors and Cleveland Cavaliers in trade talks this offseason, sources have told ESPN.

But despite the widespread trade speculation, Taylor maintained his stance on Love's future with the Timberwolves in an interview Wednesday with NBA TV.

"My preference is that Kevin will come to [training] camp -- and I'm sure he will -- and play with the team," Taylor said.

Taylor also said that the Timberwolves would not trade Love unless they received what they perceived as "equal or more value" in the deal.

Golden State has been unwilling to include Klay Thompson in the framework of a deal, while Cleveland currently does not intend to part with No. 1 overall draft pick Andrew Wiggins, sources have told ESPN.

"We are going to look at everything that makes sense that would make our team better," Taylor told NBA TV. "But we are not going to move a superb player like [Love] without getting equal or more value back."

Love has said he wants a change of scenery so he can win. He has not made the playoffs in each of six seasons with the Timberwolves.

ESPN.com's Marc Stein and ESPN The Magazine's Chris Broussard contributed to this report.