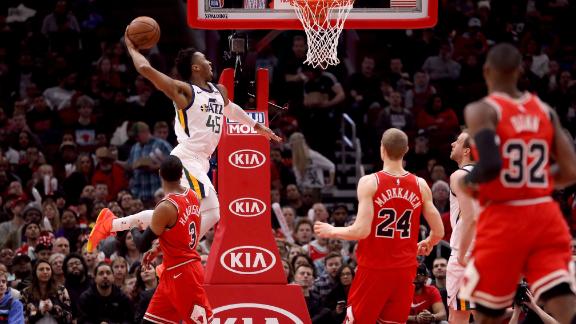 ESPN
CHICAGO -- The Jazz got a slap in the face a couple nights earlier and answered with quite a punch.

Rudy Gobert had 21 points and 14 rebounds, and Utah rolled to one of its most lopsided wins of the season, beating the Chicago Bulls 114-83 Saturday night.

The 31-point margin of victory was just three shy of the Jazz's season high. They raced out to a 70-36 halftime lead on the way to their sixth win in seven games, and bounced back quite nicely from a three-point loss at Atlanta on Thursday.

"That loss kinda was a good slap in the face," Gobert said. "I think our urgency was great tonight. We started the game the right way defensively and it just (carried to) the offense."

Gobert dominated inside, making 9 of 11 shots and blocking four.

Donovan Mitchell added 16 points and eight rebounds. Derrick Favors and Joe Ingles each scored 13. And the Jazz made about half of their shots, with Chicago offering little resistance, particularly in the early going.

"Tough one in Atlanta but we bounced back tonight," Mitchell said. "It really shows who we are and what we're capable of."

Utah is in a crowd of six teams jockeying for position behind Golden State and Denver in the Western Conference. The Jazz would love to land home-court advantage in the first round of the playoffs.

"It would be great to have the homecourt," Gobert said. "But at the same time, like I said, if we don't, I like our chances ... on the road against anyone."

The Bulls delivered one of their worst performances of the season coming off back-to-back victories and lost for the sixth time in eight games.

Otto Porter Jr. (strained right rotator cuff) and leading scorer Zach LaVine (bruised right thigh, right knee tendinitis) remained sidelined, leaving the Bulls without two of their best players. But even so, Chicago seemed disinterested right from the start while the Jazz sure were locked in.

"We're not using that as an excuse, that we're short with guys," Markkanen said. "We're just trying to focus on winning the second half and playing hard and together and get better. A 36-point hole or whatever it was -- it's kind of hard to come back from that."

The Jazz's most lopsided victory this season was a 139-105 romp over San Antonio on Dec. 4. And it looked like they might surpass that.

They led 33-18 through the first quarter and continued to pour it on in the second, heading to the locker room up by 34.

There was no shortage of highlights along the way. And Gobert was in on several of them.

He blocked a layup by Markkanen in the second quarter and converted one on the other end off of a no-look pass from Ricky Rubio driving the baseline.

Gobert had another neat block on Kris Dunn's fastbreak layup, setting up a break that Mitchell punctuated with a soaring dunk.

Things were so bad for the Bulls that fans cheered sarcastically when Dunn hit a 16-foot jumper with just under five minutes left in the half to stop a 17-0 run.

Porter missed his third straight game and LaVine missed his second in a row.

Dunn was slowed by back pain that he said limited his mobility and made it difficult to fight through screens. He finished with just four points on 1-of-8 shooting and five assists.

The Bulls also ruled out injured rookies Wendell Carter Jr. (left thumb surgery) and Chandler Hutchison (right toe injury) for the remainder of the season. Carter and Hutchison each appeared in 44 games. The No. 7 pick, Carter averaged 10.3 points and 7 rebounds, while Hutchison averaged 5.2 points and 4.2 rebounds after getting drafted 22nd overall.

Jazz: Utah's highest scoring half was 81 points against Golden State on Oct. 17. ... The Jazz had 13 players score, with seven reaching double digits.