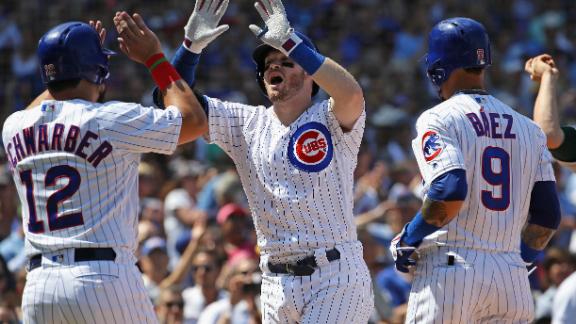 CHICAGO -- Ian Happ and Jose Quintana are both locked-in right now, and that's good news for the Chicago Cubs.

Kyle Schwarber hit a three-run homer, Victor Caratini connected and Javier Baez kept up his latest hot streak with two hits and two RBI as the Cubs responded with a rout of their own after Oakland pounded them 11-4 on Tuesday night. NL Central-leading Chicago took two of three from the A's and won its fifth in six games.

"Pretty much the exact opposite of the game we played yesterday," manager Joe Maddon said. "Quintana was primarily responsible for that. Of course Happ and Schwarber did their share."

Quintana (10-7) allowed one run, struck out seven and walked none. David Phelps and Pedro Strop each followed with a scoreless inning to wrap up a three-hitter.

Even the normally low-key Quintana was upbeat about his outing.

"I felt really good," Quintana said "My command was amazing. It was a first pitch for strikes most of the time and I changed speeds really good."

Happ, recalled from Triple-A Iowa on July 26, went deep for second time in three games against Oakland as he made his first start at second base in nearly two years.

Baez was replaced at shortstop by David Bote in the eighth after fouling a pitch of his left leg in the seventh, but Maddon said the All-Star should be all right even if the ball "got him pretty good."

The Athletics got their only run off Quintana in the fourth when Marcus Semien led off with a double and scored on Matt Olson's sacrifice fly. Oakland lost for just the third time in its last 10.

A's starter Homer Bailey (9-8) set down nine of the first 10 hitters before Chicago scored five runs in the fourth. The right-hander yielded seven runs in 4 2/3 innings in his fifth start since arriving in a arriving in a trade from Kansas City on July 14.

Baez singled in Chicago's first run in the fourth to tie at 1 before the Cubs loaded the bases with one out. Batting left-handed, the switch-hitting Happ stroked Bailey's first pitch into the left-center bleachers to make it 5-1.

Baez singled in another run off Bailey to start Chicago's four-run fifth. With two runners on, Schwarber muscled his 26th homer, an opposite-field shot to left-center, off reliever Lou Trivino to make it 9-1.

Caratini homered off Blake Treinen in the eighth.

After the game, Joe Maddon said the Cubs signed catcher Jonathan Lucroy. The 10-year-veteran and two-time All-Star is expected to join the team in Cincinnati on Thursday.

The 33-year-old will pair Caratini behind the plate to help plug a gap created when All-Star Willson Contreras suffered a right hamstring strain on Saturday. Contreras is expected to miss four weeks.

Lucroy was designated for assignment by the Angels last Friday, then cleared waivers and was unconditionally released by Los Angeles on Wednesday. In a corresponding move, Chicago optioned catcher-infielder Taylor Davis to Triple-A Iowa.

Cubs: Baez crumpled when he fouled a pitch of his left leg. After a trainer attended to him, he finished the at-bat and ran gingerly to first base as he grounded into a double play.

Cubs: LHP Cole Hamels (6-3), 2.84) looks to stay on track against Reds LHP Alex Wood (1-0, 3.18) at Cincinnati on Thursday. Hamels pitched five shutout innings versus Milwaukee last Saturday in his return from a five-week stint on the IL, and is 2-2 with a 1.07 ERA in his last seven starts.

Happ hits grand slam to get Cubs going
Ian Happ drives a fastball out of the park for a grand slam to break a 1-1 tie between the Cubs and the Athletics.
Report a correction or typo
Related topics:
sportsespnoakland athleticsmlbchicago cubs
Copyright © 2020 ESPN Internet Ventures. All rights reserved.
More Videos
From CNN Newsource affiliates
TOP STORIES