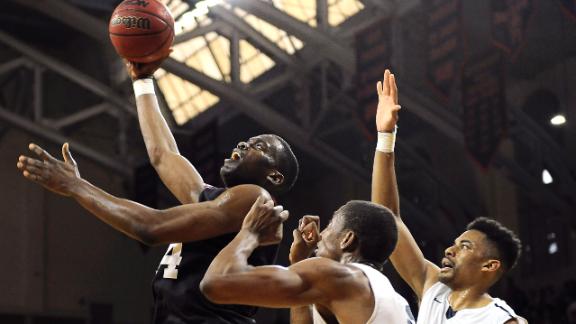 PHILADELPHIA -- Steve Moundou-Missi and Wesley Saunders had been to the NCAA tournament in each of their first three seasons atHarvard.

They weren't about to miss out as seniors.

Moundou-Missi hit a 15-foot jumper with 7.2 seconds left, Saunders scored 18 of his 22 points in the second half and Harvard beatYale53-51 on Saturday in a one-game IvyLeague playoff for its fourth straight NCAA berth.

"As a senior class, we talked about what we want our legacy to be," Saunders said. "We wanted to cement our legacy and come out with a victory."

With the game tied in the final minute, Saunders kept possession for Harvard (22-7) on Moundou-Missi's miss by hustling for an offensive rebound. Saunders then set up the go-ahead basket by driving to the lane, drawing multiple defenders and kicking it out to Moundou-Missi on the perimeter.

"He made the entire play," Moundou-Missi said. "I was wide open. All I had to do was make the shot."

Added Saunders: "I trust Steve to knock down that shot more than I trust myself maybe."

Justin Sears scored 13 points and Javier Duren had 12 for Yale (22-10), including two free throws that tied it at 51 with 54.6 seconds left. The Bulldogs missed out on their first NCAA appearance since 1962.

Duren missed a running layup at the buzzer as Harvard fans rushed the floor at the Palestra.

"I thought it was in," Duren said. "The ball took a crazy bounce. In a situation like that, it's hard to get a better look."

Yale and Harvard shared the Ivy League title with 11-3 records to set up the playoff to determine the conference's automatic NCAA bid. The Ivy is the only Division I league without a conference tournament.

After Yale took a five-point lead -- matching its largest of the day -- with 14:50 left, Saunders scored nine straight points on a three-point play and consecutive 3-pointers to give the Crimson a 36-32 lead.

But the Bulldogs fought all the way back to take a 49-48 lead with 1:40 remaining when Makai Mason collected a loose ball on the scramble for an offensive rebound and hit a jumper in the lane.

With Harvard trailing by one, Saunders hit a driving layup and was fouled, completing a three-point play to give the Crimson a 51-49 lead with 1:27 left.

"I've always said about Wesley as I said about Jeremy Lin -- it's not about the points he scores but it's always about the points he's responsible for," Harvard coach Tommy Amaker said. "I thought the way Wesley played this afternoon was he put us on his back and he carried us in stretches."

Yale beat Harvard last Friday to clinch at least a share of its first league crown since 2002. But with a chance to secure the outright championship and the automatic NCAA berth, the Bulldogs were upset byDartmouthin the regular-season finale the following night.

Before the game, both teams were presented with Ivy League championship trophies to hearty cheers from their own fans and lusty boos from the other side.

Harvard played the part of the more postseason-savvy team early on, jumping out to an 8-0 led before Yale made its first bucket five minutes into the contest. But the Bulldogs fought back and took a 14-11 lead on a Mason floater midway through the first half.

Sears, this season's Ivy League player of the year, scored eight points in the final eight minutes of the first half to help the Bulldogs take a 27-23 lead into halftime. Yale shot 52.4 percent from the floor before the break.

"As much as I want to be upset, it was really awesome to be a part of this experience," Duren said. "How many people get to play Yale-Harvard for an NCAA bid?"

Yale: The Bulldogs were involved in another Ivy playoff at the Palestra after sharing the 2002 title withPennandPrinceton. But after beating Princeton in the first game of athree-game playoff, Yale was denied a trip to the NCAA tourney with a loss to Penn in Easton. ... Sears was just the second Yale player ever selected Ivy League Player of the Year and the first Paul Maley in 1987-88.

Harvard: Harvard is the first Ivy League team to reach four straight NCAA tournaments since Princeton from 1989 to 1992. ... Moundou-Missi scored his 1,000th career point on an inside basket in the final minute of the first half. . Harvard shot just 8-for-16 from the foul line.

TIME FOR A CONFERENCE TOURNEY?

After seeing 5,256 fans pack inside the Palestra for such an exciting end to the conference season, Yale coach James Jones thinks that it's about time the Ivy League has a conference tournament.

"Anybody who came to this game tonight will walk away wanting more," Jones said. "I'm certainly a proponent of it. I think it's great for the league."