Heat's Chris Bosh out for season 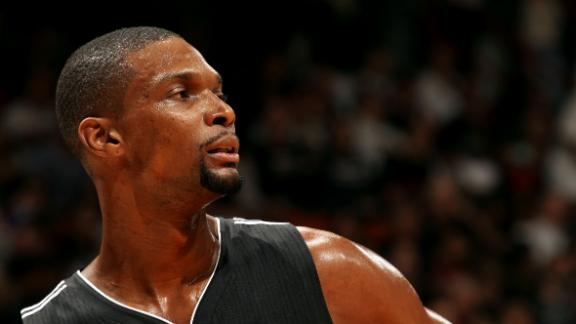 Miami Heat forward Chris Bosh will miss at least the remainder of the season after developing blood clots on one of his lungs, the team announced Saturday.

The team said the All-Star is receiving care guided by Heat physicians at a South Florida hospital and resting comfortably.

Bosh thanked fans on social media late Saturday night for their "messages, love and support" over the past few days.

Thank you for all the messages, love, and support. It has truly lifted my spirits through this tough process. #Heatnation #Iwillbebacksoon #Boshfamily

A photo posted by Chris Bosh (@chrisbosh) on

"His health will be restored," Spoelstra said before Miami's 105-91 loss to the New Orleans Pelicans on Saturday night. "That's the most important thing. That's bigger than basketball."

"It's been very emotional for all of us," Spoelstra said. "I was in constant contact with CB. But he didn't know either until they were able to go through all the tests and see all the specialists. ... I can't imagine how tough it was for Chris and [his wife] Adrienne. ...

"We're not even thinking about [his return] right now. The most important thing is he'll be healthy again. We'll get a game plan as we continue to get more information."

The medication required to treat such a condition typically requires at least six months of limited physical activity.

In cases like these, it's common for the clots to have worked their way from the legs to the lungs, a dangerous occurrence. Blood clots are always a serious condition, but this is a particularly scary moment for Bosh and the NBA after former Portland Trail Blazers star Jerome Kersey died suddenly Wednesday of a blood clot in his lung. Kersey was 52.

Last month, Brooklyn forward Mirza Teletovic was ruled out for the season once clots were found on his lungs. Cleveland's Anderson Varejao went through a similar situation and missed most of the 2012-13 season.

And Udonis Haslem, one of Bosh's teammates, said publicly for the first time Saturday night that he experienced blood clots on his lungs following surgery for a foot injury during the 2010-11 season.

"First of all, the pain, it's excruciating," Haslem said. "Every time you try to inhale to take a breath, it's like somebody's stabbing you in your lungs."

Bosh was admitted to the hospital Thursday after complaining about discomfort in his chest for several days.

He spent the early part of this week on vacation with family and friends, including Wade, in Haiti. Wade said Bosh wasn't "feeling his best" on the vacation. When Bosh hadn't improved by Wednesday, he was sent to a team doctor and from there went to the hospital for tests.

"There just came a point in the vacation where he didn't feel right," Wade said. "He kind of relaxed and rested, and then when he got back, he did what he should have done. ... [He] got to the doctor and tried to see what's up."

Losing Bosh is nothing short of a shock to the Heat, who entered Saturday with a 23-31 record and holding on to the No. 7 spot in the Eastern Conference playoff race.

He was averaging 21.1 points and 7.0 rebounds per game this season, his first in a five-year deal signed over the summer that will pay him $118 million.

Bosh is the second NBA player whose final game this season was the All-Star Game. New York's Carmelo Anthony was shut down for knee surgery earlier in the week, a move that was long expected.

"It probably hasn't hit him yet that he's going to miss the entire season," Wade said. "But right now that's the furthest thing from his mind and all of our minds."

Brian Windhorst and Israel Gutierrez of ESPN.com and The Associated Press contributed to this report.

Heat's Plan Without Bosh
ESPN NBA Insider Chris Broussard discusses the Heat's plan now that Chris Bosh is out for the season after developing blood clots on his lungs.

Bosh Out For Season With Blood Clots
Dr. Mark Adickes discusses the severity of the blood clots that developed on Chris Bosh's lungs and the timetable for his recovery.

Pelicans Lose Two, Top Heat
The Pelicans lost Ryan Anderson to a knee injury and Anthony Davis when he aggravated the shoulder issue that sidelined him from the All-Star Game, but Eric Gordon scored 16 points in the third quarter and New Orleans topped Miami 105-91.