Hornets all the buzz in Charlotte 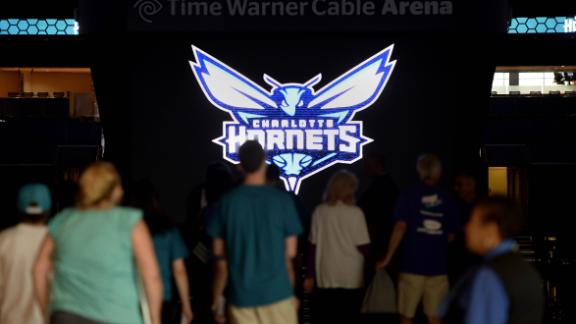 ESPN
CHARLOTTE, N.C. -- The Charlotte Hornets are back.

The NBA franchise announced Tuesday at a news conference that it has officially changed its name back to the Hornets after 10 years of being known as the Bobcats.

The change comes nearly one year after owner Michael Jordan indicated he wanted to change the name back to the Hornets. The league approved the change in July.

Jordan didn't attend the news conference but issued a statement saying it's a "historic day for our franchise, our city and our fans."

The Hornets resided in Charlotte from 1988 to 2002 before George Shinn moved the team -- and name -- to New Orleans after a messy divorce from the city. The name became available again when New Orleans owner Tom Benson changed his team's name from the Hornets to the Pelicans.

Several hundred fans showed up at the downtown arena for the formal announcement.

Hornets president and CEO Fred Whitfield said the goal is to restore the energy the Hornets brought to the city when they were in Charlotte 12 years ago playing at the Charlotte Coliseum, which was known by fans simply as "The Hive." It was there that the Hornets were consistently among the league leaders in attendance.

"For me, this day is almost surreal because I was a Hornets season-ticket holder," Whitfield said. "I know what it felt like in the old Hive and the energy and excitement that happened to be there. Michael talks fondly about the days he came in and played against the Hornets and what a challenge it was not only to battle a good team but also the fans."

Whitfield also announced that, in collaboration with the NBA and the Pelicans, all the statistical information, records and history of Charlotte NBA basketball will be restored to the franchise.

That means the Hornets will now own and have access to all the historical elements from the recent Bobcats era (2004-14) as well as the original Hornets teams that played in Charlotte -- including stats from stars such as Larry Johnson, Alonzo Mourning and Muggsy Bogues.

All Hornets records from their years in New Orleans will revert to the Pelicans' history, Whitfield said.

"That was a piece that was really important to us because we knew how important that was to our fans," Whitfield said. "Being able to have the old Hornets alumni back and be a part of family was important. We can say to them, 'Hey, you are welcome back and you are a part of the family."

Whitfield estimates the name change will cost Jordan more than $4 million before all is said and done. The team is still working through the tedious process of rebranding the arena.

But Hornets logos have begun to spring up inside and outside the arena.

"It's been well worth it," Whitfield said. "And it couldn't have happened without the financial commitment of our owner."

The Hornets unveiled their new logos in December.

They will unveil their new uniforms June 19 and playing floor design June 26. The Hornets' name will return to NBA action at the 2014 Summer League in Las Vegas.

The popular Hugo the Hornet mascot will make his official return June 5.

He said 90 percent of last year's season-ticket holders have renewed for the 2014-15 season. He also said the Hornets are currently No. 1 in the league for new season-ticket sales.