How will each game of championship Saturday impact the College Football Playoff picture? 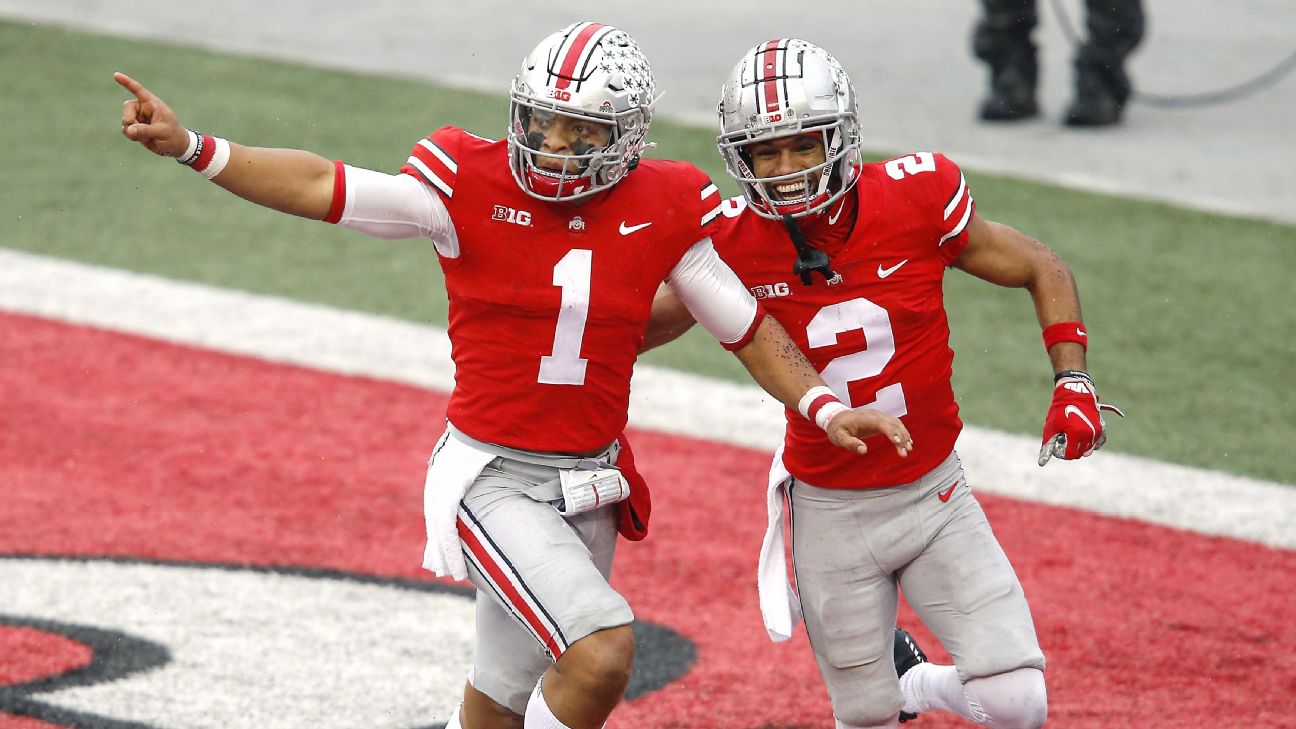 Championship weekend means one thing for the Allstate Playoff Predictor: It's the last time to run scenarios.

Two days before the College Football Playoff selection committee makes its final judgments on the 2020 playoff race, we're taking our model out for a spin to answer this year's pressing questions. Can Notre Dame afford a loss? Is Florida still alive? Is Oklahoma?


Prior to now, the Predictor was unaware of the selection committee's rankings, which is why it previously thought Iowa State was long gone from the playoff race and USC was a real contender. But starting with the penultimate rankings issued Tuesday, the model is now cognizant of the committee's rankings. Which changes things, at least for the model.

So, let's play out conference championship weekend and answer the biggest question of all: Who's In?

Right away, the Predictor has a bit of a take. Most people believe this is straightforward, with Alabama, Clemson, Ohio State and Notre Dame in. The model thinks that's certainly very possible, but it considers Texas A&M in a virtual tie with the Fighting Irish in terms of a chance to grab that last spot.

It seems a little hard to imagine right now given the Irish's undefeated record and previous win over Clemson. But consider, at that point both teams would be one-loss non-champions. Though Notre Dame will have played two more games, going 8-1 against A&M's schedule is actually more difficult than going 10-1 against Notre Dame's, according to strength of record (though it remains unclear if the committee would see it that way). But while Texas A&M has the slightly better résumé, Notre Dame is the slightly better team, per FPI. Which is what makes this a toss-up, in the Predictor's eyes, though it does seem as if the committee is weighing the question of which team is "best" more heavily this year, which would help the Fighting Irish. This is a close enough call that the way the results play out for these two teams could determine which school gets the edge, in the Predictor's mind, heading into the selection.

Note that A&M and Notre Dame still have the best shot even if Iowa State wins the Big 12.

Scenario B: The favorites win, but Notre Dame beats Clemson

You can probably guess that if Texas A&M is in a virtual tie for the fourth spot in scenario A, it's the favorite in scenario B. This probably comes down to A&M, Clemson, Oklahoma and Cincinnati. The Predictor would swap USC in for Clemson -- it's not going to give an undefeated Power 5 champion no shot and wouldn't see any reason to excuse two losses for non-champion Clemson. Either way: A&M is the favorite for the last spot here.

So in this case we've got the No. 5 and No. 6 teams battling for a clear open spot -- in the Predictor's mind -- after Clemson is knocked out. Both Texas A&M and Iowa State pick up wins over championship weekend, but the No. 6 team earns the better victory and earns a conference championship. Is that enough? The Predictor leans yes. It's close though: Iowa State would have a 36% chance to get in and Texas A&M would have a 31% shot. I've already noted that Iowa State's inclusion in the playoff would be completely nonsensical, but we're not really here to talk about who should get in, but rather who will get in. The Cyclones do have a shot.

Did the committee leave the door open for Florida to sneak in even after the thrown-shoe loss to lowly LSU? The Predictor thinks so.

Notre Dame and Ohio State are obviously locks here, and it thinks Alabama is very likely to get in as well. The fourth spot? It makes the Gators the favorite -- a product of their conference championship, yes, but really their ranking last week when they fell just one spot following the loss to the Tigers.

This ends up being somewhat straightforward, with A&M and Notre Dame as the two teams likely to join Alabama and Clemson in the playoff. I point it out though because it leads to a sort of odd scenario of two SEC schools vs. two ACC schools in the playoff.


This might be Cincinnati's shot. The Predictor would make Texas A&M the favorite for the third spot and USC a narrow favorite for the fourth spot but, as we've mentioned already, the model is probably too high on USC as is. If you asked me before the season if the committee had a choice between an undefeated Pac-12 champion and an undefeated AAC champion, I'd have guessed the former. But given the current ranking disparity, it's reasonable to guess the Bearcats land this spot. Of course, Iowa State winning instead of Oklahoma might flip that, however.

If you're wondering if Northwestern could sneak in under this scenario: We won't say it's impossible and it's too specific of a scenario for us to put an exact number on, but our ballpark guess would be only a 10% or so shot for the Wildcats.

I'll be honest: I went hunting for a Coastal Carolina playoff berth. What combination of results would land America's Team in college football's top four?

In this very specific universe, the selection committee came back with this playoff: Alabama, Notre Dame, Oklahoma, Coastal Carolina.

So yes, Chanticleers fans. I'm telling you there's a chance. 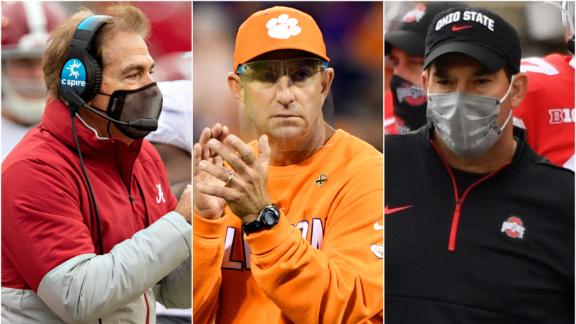