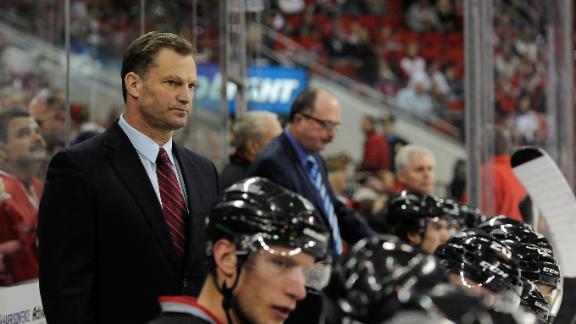 One week into his job as general manager, Francis fired coach Kirk Muller and most of his staff.

Now leading a franchise that has made the playoffs just once in eight years, Francis cited the need for a "fresh start'' and warned that nobody on the roster -- from the marquee names to the grinders at the end of the bench -- is untouchable.

"I don't think changing the coaches lets the players off the hook,'' Francis said. "I think there has to be a lot of responsibility on their shoulders as well to turn this thing around. Hopefully we can do that going forward.''

Francis, a Hall of Fame player and former captain and assistant coach with the Hurricanes, took control of the team last week after Jim Rutherford stepped aside after a two-decade run as GM.

As part of his first big housecleaning move, assistants John MacLean and Dave Lewis also were fired, and goaltending coach Greg Stefan was reassigned to the team's pro scouting department.

Rod Brind'Amour, a third-year assistant who was the captain of Carolina's only Stanley Cup-winning team in 2006, was retained because Francis said "Roddy really didn't have, in my estimation, a prominent role on this staff.''

Francis says it's "an open search at this point'' and he is looking for "a guy who's a teacher'' with strong communication and leadership qualities. Ideally, Francis said, the coach would be in place before the June 27-28 draft.

"I don't really have anybody in mind,'' he said. "We'll start [with] a few names we're putting on the list, and we'll go forward looking at that list and see who is the best fit for our team going forward.''

Muller was 80-80-27 in three seasons with the Hurricanes, who haven't made the playoffs since 2009, the longest active drought in the Eastern Conference. Carolina finished 13th in the 16-team East this season.

"The biggest thing was our inconsistency,'' Francis said. "Some nights we looked like a great team, and other nights we really struggled, looked like we didn't know how to play the game at times.''

Muller, 48, made six All-Star teams during a 19-year career with six clubs, most notably New Jersey and Montreal.

He had never been a head coach in the NHL and was in his first season coaching the Milwaukee Admirals of the AHL when he was hired during the 2011-12 season to replace the fired Paul Maurice.

The relentlessly positive Muller spent the past month in limbo, saying in mid-April that upper management had not told him anything about his job status and that he was going about his business as if he would remain the coach.

Owner Peter Karmanos Jr. said late in the season that he liked the coaching staff, and he added last week that it would be Francis' call whether to retain Muller.

During his formal introduction as GM, Francis said his impending decision on Muller's status "needs due process.''

Muller's final season was plagued by subpar performances from the four highest-paid players on the roster -- forwards Alexander Semin and Eric and Jordan Staal, and goalie Cam Ward.

When Ward was asked during his exit interview if it was tough for Muller to get his message across in the dressing room, the goalie said "for me, obviously, I'm going to avoid that one.''

Francis said he didn't sense much friction between Muller and the players.

"You look at our team, there's guys who didn't play well," Francis said. "They were told that by us in the exit meetings. There's always going to be situations where, as a player, if you don't like the coach, you've still got to perform.''