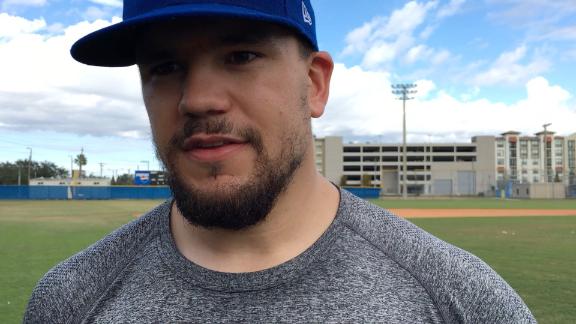 The drill consisted of Murphy calling out which cone the Chicago Cubs slugger should run to out of a square of four. After Schwarber switched directions three or four times, Murphy threw a tennis ball over his head, mimicking a fly ball. Schwarber's job was to track it down, but on this occasion, he missed. Murphy instructed him to do it again.

That kind of a scene played out over and over again between player and trainer in three different locations in Tampa Bay throughout the day, as it has nearly every day this offseason. Since early November -- not long after the Cubs were knocked out of the National League Championship Series -- Schwarber has been on a mission. And not just to track down tennis balls or lose a few pounds. He isn't just looking for a comeback season after a rocky 2017. He wants more -- much more.

"Everyone is caught up in the weight-loss thing," Schwarber said between workouts Friday. "I'm not. I'm training my body for 162 games times nine innings or maybe more. I want to be an MVP. I want to be a Gold Glover. I want to set my standards really high."

Schwarber is a "don't tell him he can't do it" kind of guy, perhaps because he already achieved the nearly impossible in returning several months early from a devastating knee injury to help the Cubs win the 2016 World Series. But this winter is about more than playing well over the course of a few games. It's about dominating all 162. Schwarber calls it a "lifestyle change."

His workouts include agility drills on a football field -- that's where he eventually tracked down that tennis ball -- followed by indoor training sessions at the Applied Science and Performance Institute (ASPI), a popular workout facility among elite athletes in the area. Finally, Schwarber's day ends with him doing what he does best: hitting a baseball really far. But as any Cubs fans knows, he needs to make more contact.

That's just one of Schwarber's goals in a transformative offseason for the 24-year-old player.

IT'S 9 A.M. and Schwarber is beginning his day on an artificial football field at Skyway Park, where he'll spend an hour on agility. His day starts here, but the genesis of his makeover began moments after last season ended. In reality, it might have come before that -- about the time Schwarber was sent to the minors -- but after he hit .211 and saw his playing time decrease, Schwarber knew changes were needed. His minus-9 runs saved in left field also screamed at him to get to work.

"As soon as that season ended, I wanted to do everything in my power not to have the feeling that I had this past year," Schwarber said later in the day while sitting in his truck. "I want to be great. You have to do all those little things to be great. I don't want to just be known as some guy that played for the Cubs. I want to be a leader. I want to be the best player I can be. And that means getting in the best shape I can be."

Schwarber waves off questions about how much weight he has lost because he isn't concerned with a number, though his trainers believe it's 17-20 pounds. Schwarber sees that only as a means to an end. To become a great player, he needed to get into great shape.

"Since November we've focused on a good base," said Murphy, who spent nine years playing professional football including NFL stints with the Minnesota Vikings, St. Louis Rams and Tampa Bay Buccaneers. "Stability in his knee, and then it's all been power, speed and agility. Everything about him I want to be quick. He'll be as strong as he needs to be to hit a baseball far the rest of his life. Now you focus on quickness and position to the ball."

Schwarber has rid himself of the brace on his leg that as recently as last spring he said he thought he would wear for the rest of his career. Not anymore. With weight loss has come less stress on his surgically repaired left knee. Anyway, Murphy believes the brace was a crutch.

"The guy came out of the womb hitting a baseball," the trainer said. "Anything you put on his body hinders that."

No brace, a new diet and a strict workout routine mapped out backward from Feb. 10 are how Schwarber approached the winter. He eliminated non-necessary travel and minimized vacation time in a commitment to make the most of his most important offseason to date.

"It's only things that are going to benefit your professional career. I'm already a strong guy. The best thing to do now is to train to be more baseball-specific: get faster, get more explosive because I'm playing the outfield," Schwarber said. "I want better first steps to the ball. Instead of diving for that ball, I want to catch it on my chest. That's the goal."

After an hour of showing off his newfound agility on the football field, Schwarber hopped into hisDodge Ram truck to take a quick trip to ASPI for some strength and conditioning, with a focus on balance and core strength. Like with the weight loss, it isn't about aesthetics -- Schwarber isn't looking to build muscle and look good in the gym. He's trying to become more flexible.

When Schwarber came to Murphy this offseason, the trainer asked what he wanted. After Schwarber hemmed and hawed for a moment, Murphy told him to just come out say it.

"'I want to be the best,'" Murphy recalled Schwarber telling him. "I said, 'OK, here is what we have to do to get there.'"

"I would not take back the last couple years at all."

SCHWARBER HASN'T CHEATEDon the plan Murphy laid out for him in the gym -- not even once, according to the trainer.

"In fact, he's held me to it," Murphy said with a laugh while watching Schwarber power through another set in the gym.

Schwarber's only cheating comes with his new diet. But that's limited to once a week.

Schwarber confirms the schedule. On many days, it's eggs for breakfast, chicken for lunch and salmon for dinner.

"The key is it has to be stuff you like," Schwarber said. "I like that stuff. I would say the diet hasn't been tough."

Meals are prepared by a professional so he can just microwave them for "two or two-and-a-half minutes, and they don't taste like they've been microwaved," he said. "I really like the chicken parmesan."

As for that cheat meal?

"It varies," Schwarber said with a smile. "You get cravings. Sometimes fast food. They have Skyline Chili here [in Tampa Bay]. I like pizza. Saturday is my cheat meal day."

Fast food was far from his mind at this point in the day, though.

After "rotational work" with a medicine ball and some resistance training, Schwarber departed ASPI and made the short drive to Jefferson High School's baseball field, where he worked on his hitting at the same field that produced major league stars Tino Martinez, Fred McGriff and Luis Gonzalez. As he waited in his truck for someone to unlock the gates to the field, Schwarber reminisced about what brought him to this point.

"I would not take back the last couple years at all," Schwarber said of his knee injury and hitting struggles. "We won the World Series. We've been to the playoffs the three years I've been in the big leagues. Personally, it hasn't been the smoothest ride. Everyone says you learn from your failures. It's true. All these things that have compiled up the last couple years, I feel like I've learned a ton about myself. It's only going to be beneficial as I head into a long career."

'Hitting is a reaction. I'm trying to hit the ball where it's pitched.'

SCHWARBER STEPS INTOthe batter's box at Jefferson High with few onlookers. A couple of high school prospects are hanging out along with one of Schwarber's agents, former major leaguer Jason Romano, and a friend who will throw batting practice to him. First is work off a tee, which Schwarber moves around the box while raising and lowering it. He won't get too technical right now, saving that for when he works with new hitting coach Chili Davis in the spring.

"The swing is not bad, just making it more functional," Schwarber said. "I'm addressing some weaknesses. And you want to keep your strengths still strong."

If you're concerned that Schwarber has lost some power with his loss of weight, watching him crush balls over the fence off a tee would quickly put you at ease. It takes a lot of strength to hit a ball 400 feet without the velocity of a pitch aiding the process.

As the session expanded to underhand toss to different areas of the strike zone, the goal remained simple.

"Hitting is a reaction," Schwarber said. "I'm trying to hit the ball where it's pitched. Trying to barrel the ball that way."

Again, his strength is on display as balls rocket to all parts of the field with a whizzing sound. Many land on the other side of the fence. About 15-20 leave the yard on this day -- 35 home runs is the most Schwarber has hit during a batting practice this winter -- including some of the epic blasts expected of a player dubbed "Bam Bam," after the Flintstones character, by a former hitting coach.

But the goal for 2018 isn't to hit them farther. It's to hit them more frequently. Last season, Schwarber missed on nearly 30 percent of his swings, according to ESPN Stats & Information. That was 5 percent more than the league average.

"I'll get with Chili [Davis] in the spring, and we'll come up with a plan," Schwarber said. "He's seen some video, but we haven't gone in depth."

For now, Schwarber isn't concerned about upcoming swing tweaks, where he'll hit in the order or even the constant stream of trade rumors. He doesn't care because the speculation isn't anything he can control. Plus, everyone knows how Theo Epstein and the Cubs front office feel about him.

"He's always been someone teams have had interest in, I guess, but we probably have the most interest," Epstein said of Schwarber last week at the winter meetings.

It's because they believe. They believe he'll be the hitter they saw when they drafted him, the player he was when he first arrived in the majors and then later, in the World Series. He wants that and more. That's what this winter is about: becoming a complete baseball player -- not just a slugger and not even just a good hitter.

"It was on my mind right when the season ended," Schwarber said. "I wouldn't say it's been hard to get up and do. It was something I've been looking forward to for a while."

Schwarber: 'I want to be the best I can be'
Cubs LF Kyle Schwarber discusses the changes that he made during this year's offseason to focus on losing weight and becoming a better player.