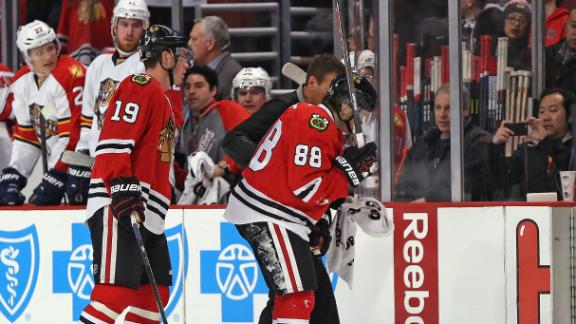 CHICAGO -- Blackhawks forward Patrick Kane left Tuesday's 3-2 shootout win over the Florida Panthersin the first period due to an upper body injury and did not return.

A source told the Chicago Tribune that Kane will be sidelined more than six weeks and could miss more than 10 weeks.

Kane was cross checked in the lower back by the Panthers' Alex Petrovic at 7:49 of the first period. The force of the hit knocked Kane to the ground and drove him into the boards. He was slow to get up and was bent over as he skated to the bench. He immediately departed for the locker room.

"Looks like he might miss some time, but we'll know the extent of it tomorrow," Blackhawks coach Joel Quenneville said after the game.

Petrovic was given a two-minute minor penalty.

"You get ticked off when the best player in the league gets hit like that," Blackhawks forward Kris Versteeg said. "I can't totally comment because I didn't fully see it. You never want to see that. People pay a lot of money to watch Patrick Kaneplay. It's never good when he's out of the lineup -- not only for us, but for the league. Hopefully, he's good. We'll see how it goes."

Kane is tied for an NHL-best 64 points and leads the Blackhawks with 27 goals and 37 assists. He has not missed a game this season.

"He's 20 to 30 points ahead of the next guy on the team," Versteeg said. "That's hard to replace that scoring. This team always seems to find ways, so we're just going to have to do that. Dig deep."

The Blackhawks most recently played without Kane for a stretch during the 2014-15 season. He missed the final 12 regular-season games with a knee injury. He has remained healthy for much of his career and hasn't missed more than 13 games in any regular season in his eight-year career.

"I don't think you can replace the things that he does with the puck, without the puck, the attention that he draws, but one of the strengths of the organization is depth," Blackhawks forward Patrick Sharp said. "You hear it all the time: When a player goes down, you need to step up and collectively fill those shoes. But you guys know as well as I do what kind of player Kaner is."

Kane Injured In Blackhawks' Win
The Blackhawks lost Patrick Kane to injury in their 3-2 shootout win over the Panthers.