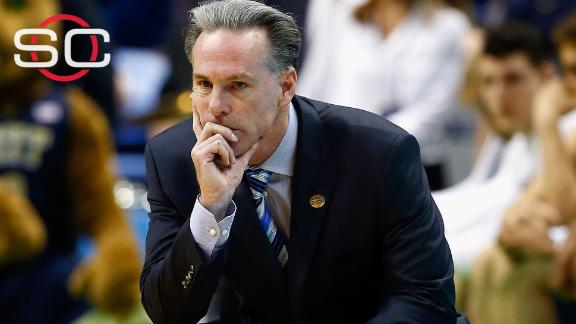 Pittsburghcoach Jamie Dixon is headed to his alma mater, TCU, where he played on the Horned Frogs team that won an NCAA tournament game nearly three decades ago.

TCU hired Dixon on Monday, a week after Trent Johnson was fired after only eight Big 12 Conference wins in his four seasons.

Scott Barnes, Pittsburgh's athletic director for less than a year, said there had been several conversations with Dixon about the job since the Panthers were knocked out of the NCAA Tournament last week.

"We all knew that job was open, so it wasn't a surprise," Barnes said. "As we went through the process, we learned there was a very small window of opportunity and wasn't sure he was going to have an opportunity to take later, and his heart and his head was moving that way."

TCU will introduce Dixon as its new coach during a news conference Tuesday. Athletic director Chris Del Conte tweeted late Monday, "Look who's coming home," with a picture of Dixon and his family with the AD and other TCU officials.

The 50-year-old Dixon had a contract with Pitt until 2023, with a buyout that was believed to be about $10 million.

Without getting into specific numbers, Barnes said the significant buyout was "above anything" he had seen in the marketplace. But Pitt "softened" it to allow Dixon to follow his heart back to TCU.

"It wouldn't have been good for our program or our student-athletes or him and his family to hold him hostage by what was a way beyond market buyout," Barnes said.

Johnson had two years left on his contract after going 50-79 overall.

TCU is 8-64 in Big 12 games since moving to the league in Johnson's first season, with the losses coming by an average margin of 15 points. TCU was 12-21 overall and 2-16 in conference this season.

Dixon was 328-123 at Pitt, where he led the Panthers to Big East regular-season titles in 2004 and 2011 before the school moved to the Athletic Coast Conference three years ago. Pitt was 21-12 this season and lost to Wisconsin 47-43 on Friday in the first round of the NCAA tournament.

"He was a great leader who cared deeply for our student-athletes and our entire basketball program," Pittsburgh chancellor Patrick Gallagher said in a statement. "I can appreciate that the rare chance of coaching for your alma mater does not come up very often and is hard to pass up, but we will miss him here at Pitt."

The Panthers had two 31-win seasons and went to the Sweet 16 three times in Dixon's first six seasons. They haven't gotten that far in the tournament since 2009, when they made it to the Elite Eight. They were left out of the field in 2012 and 2015.

"Particularly today, with the access that we all have to sports, whether it be media or fans, there's a heightened sense of awareness [of criticism]. ... Over time, that can tend to wear on you," Barnes said. "The other piece to that is, again, very few coaches have the opportunity to return to their alma mater. That is special. ... That certainly played a factor."

Dixon arrived at Pittsburgh in 1999 as an assistant to Ben Howland, and he was promoted to head coach when Howland left for UCLA. Before that, Dixon was an assistant coach at Hawaii, Northern Arizona, UC Santa Barbara and a junior college in Los Angeles.

Dixon was a four-year letterman for the Horned Frogs. As a senior, he was a starting guard in the school's most recent NCAA tournament victory. The Horned Frogs beat Marshall in the first round in 1987 before losing to Notre Dame.

Dixon was inducted into the TCU Athletic Hall of Fame in 2007. He was a .451 career 3-point shooter, which was the school record when he finished playing but is now tied for second best.

This season, the Frogs began playing in their new campus arena, where Dixon will be introduced Tuesday. The $72 million project was a complete renovation of the coliseum that was their home when Dixon was a player, including new locker rooms and team meeting rooms.

TCU's only senior this season was 6-foot-8 forward Devonta Abron, a former Arkansas transfer who started only six games after missing 2013-14 because of a torn Achilles tendon.

Information from The Associated Press and ESPN's Jeff Goodman was used in this report.