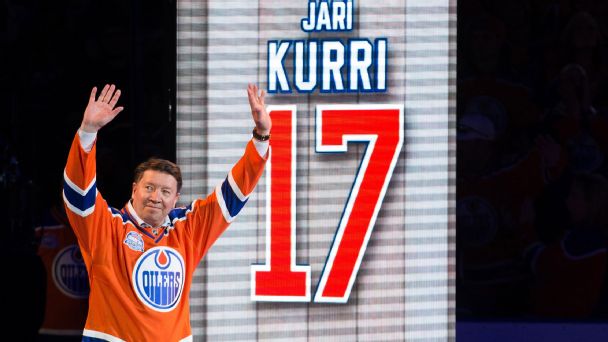 Who is the most underappreciated Hall of Famer of all time?

Greg Wyshynski: Jari Kurri has 601 career goals (19th all-time) and 1,398 career points (21st all-time). That he earned the majority of them playing with Wayne Gretzky on the Edmonton Oilers from 1980-88 has turned Kurri into the go-to example of a great player elevated to immortal status by riding shotgun for a sports god. But Kurri didn't surf into the Hall of Fame on Gretzky's coattails. He's an all-time great in his own right.

Along with his offensive output, Kurri was considered one of the most accomplished defensive right wingers of his era, playing a 200-foot game that resulted in top-five finishes for the Selke Trophy from 1982-1986. His reputation as a defensive standout was cemented on the penalty kill, where Kurri scored 39 shorthanded goals in his career, which is seventh all-time. But Gretzky had 73 shorties, so he can't even get a spotlight here.

I've always wondered: Why have some held Kurri's ability to excel with the greatest player of all-time against him, when it should be celebrated?

Hockey history is littered with guys who couldn't ride with the GOATs, let alone make them better. Kurri's defense begat Gretzky's offense, and vice versa. Gretzky and Kurri were unstoppable on an odd-man rush, not only because Gretz could thread the needle but because Kurri had an incredible one-timer to finish those chances. There's no question that Gretzky is still Gretzky without Kurri, but does he roll to three straight seasons of 200-plus points without him?

The obvious question: Is Kurri still Kurri without Gretzky? Well, after Wayne began his Los Angeles Kings adventure in 1988, Kurri amassed 44 goals and 58 assists in 76 games, and then 33 goals and 60 assists in 78 games over the two subsequent seasons. It was a glimpse of what he could accomplish without the Great One, if just a glimpse.

Playing with Wayne Gretzky casts a rather large shadow over one's own talents and accomplishments. Being a cog in a dynastic machine, like the 1980s Oilers, can do the same thing. This is why Jari Kurri doesn't get the legendary status, name-spoken-in-hushed-tones status that some of his peers enjoy, despite entering the Hall of Fame in 2001. Which is a shame. He wasn't a passenger. He was a co-pilot.

Emily Kaplan: We know him as a suit now -- he's the general manager of the Carolina Hurricanes -- but Ron Francis is criminally underappreciated as a player. Sure, he was a first-ballot Hall of Famer, suggesting the love was not lost among the voting committee. But might it surprise the average fan that Francis ranks fifth all-time in scoring (a whopping 1,798 points through an equally whopping 1,731 career games)? Or that Francis trails only Gretzky all-time for assists? Yes, Francis' 1,249 helpers are more than Mark Messier recorded in his career. Or Ray Bourque, or Jaromir Jagr, or Paul Coffey or ... every other player not named Wayne Gretzky. Francis' jersey was raised in the rafters of Hartford's Civic Center; he won two Cups with the Pittsburgh Penguins; his number is retired in Carolina.

So why does the Francis admiration society not seem to have nearly as many members as that for Messier or Bourque or Coffey? Perhaps it's his style of play; he never had as dominating a presence as the aforementioned players. Maybe it's that Francis was low-profile and selfless when he played. He was well-rounded (a Selke winner) and humble, winning three Lady Byngs. Sports Illustrated nicknamed him "Captain Class." The most likely reason we don't appreciate Francis more is that sandwiched around that success in Pittsburgh, he played for two teams (the Whalers and Hurricanes) that weren't very good. But think of how many players he shared a line with -- including Jagr, Mario Lemieux, Jeff O'Neill, Sylvain Turgeon and Pat Verbeek -- and he made them all better. Consider this endorsement from Jagr, in a quote to the Newark Star-Ledger in 2013: "He probably assisted on most of the goals I scored. ... The thing is, he gave me that extra confidence. Sometimes you go into a game and you have to score goals, but you don't feel right. I had him, so I never thought I was not going to score. Even if I didn't feel very well or if I played bad, I knew he could always make me look good."

Chris Peters: I'm going to go way back for this one and nerd out a little bit. My pick is Frank Brimsek, who spent nine seasons with the Boston Bruins between 1938-39 and 1948-49 before closing out his career with the Chicago Blackhawks (then known as the Black Hawks).

The reason I pick Brimsek is that, if we're talking strictly in American hockey history terms, he should be a mythical figure. However, perhaps due to a relative lack of national interest in his heyday, Brimsek is not as celebrated as the sheer brilliance of his career should warrant. Yes, he got a very cool nickname out of the deal, being known forever as "Mr. Zero" after earning six shutouts over his first 10 NHL games with the Bruins.

Consider also that Brimsek was one of only 10 American players in the six-team NHL in his rookie season (via quanthockey.com), which ended with him winning the Vezina and Calder Trophies while leading the Bruins to the Stanley Cup. It was hard for Americans just to get an honest look in the NHL in those days, but his talent led the Bruins to sell off veteran goalie Tiny Thompson, who had won the Vezina, his third, the season before.

Brimsek won another Vezina, another Cup and was an All-Star in eight of his 10 total seasons -- two first-team selections and six second-team nods -- in a career that ended up being put on pause for two years during World War II. "Mr. Zero" finished his career with 40 regular-season shutouts, the most by any American goalie until Jonathan Quick surpassed him in 2016. Brimsek was one of the rare American stars at a time when so few Americans were even playing at all. I think his impact and the groundwork he laid in his career has been too easily forgotten, which is why he is my pick.
Report a correction or typo
Related topics:
sportsespnchicago blackhawkspostseasonedmonton oilershockey hall of fameron francistorontojari kurristanley cupfrank brimseknhlhartford whalerscarolina hurricanesall time greatshall of famehofplayoffs
Copyright © 2020 ESPN Internet Ventures. All rights reserved.
More Videos
From CNN Newsource affiliates
TOP STORIES