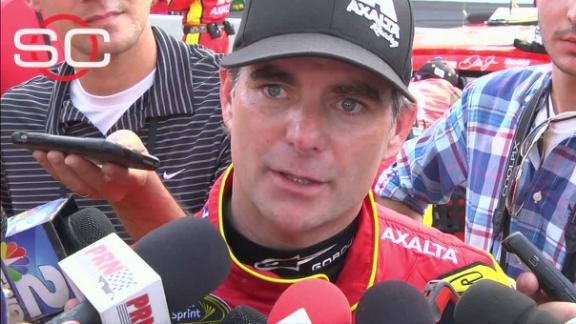 INDIANAPOLIS -- The two Indiana favorites didn't win the Brickyard 400. Far from it.

But Tony Stewart and Jeff Gordon gave the fans at Indianapolis Motor Speedway the highlight of the Brickyard 400 minutes after the checkered flag dropped on the Kyle Busch victory Sunday afternoon.

Stewart and Gordon took a ceremonial lap driving side-by-side in what is expected to be their final race in the state that has celebrated their racing prowess. After they parked on pit road, Gordon went over to Stewart and gave him a hug.

Gordon didn't expect to compete Sunday -- he was supposed to drive the pace car. But with Dale Earnhardt Jr. out because of concussion-type symptoms, Gordon came out of retirement to race, sharing the spotlight with Stewart, who will retire from Sprint Cup racing after this year.

A five-time Brickyard 400 winner, Gordon finished 13th, two spots behind the two-time Brickyard winner Stewart. The Indiana native Stewart finished 11th. He still lives in the state while Gordon moved to a town near Indianapolis when he was 14.

"For us to share that moment together, I mean that's probably our last lap around here in a professional race, and I'll cherish that moment," Stewart said. "It's something that doesn't happen very often.

"It was pretty cool. ... We're never going to get that chance to do that again."

In January, Gordon invited Stewart to go with him dune buggy riding in California. Stewart broke his back on a hard landing, forcing him to miss the first eight races of the year.

"Tony and I have gone through a lot over the years, but he and I have become really good friends," Gordon said. "I was with him when he got hurt this year. ... I learned a lot about Tony Stewart. He's driven. He's tough.

"To see him in that pain I saw him in and come back and win Sonoma [last month] and be out here driving like this with a chance at a championship when this whole thing is over, that's impressive."

As far as the race, the 44-year-old Gordon had some typical Gordon moments on the track -- he was never great on the double-file restarts. He had some moments where he nearly got caught up into accidents. He passed about four cars on the final couple of laps.

"I enjoyed moments," Gordon said. "I enjoyed that last [ceremonial] pace lap with Tony Stewart. ... I'll be honest. Those restarts, that's not fun.

"There's nothing fun about that unless you are making great passes and go forward. When you are getting your butt kicked on restarts, it's not fun. That was the least fun for me, but it's also something I need to work on for next week at Pocono."

Gordon joked that he was too old to be doing this much longer. He is committed to Pocono next week but nothing beyond then. A timetable for Earnhardt's return has not been set.

"Being out of the car this long made me realize how tough this truly is, how not only fit are these drivers but how talented they are," Gordon said. "They just took advantage of me on those restarts.

"They knew they could -- they probably knew that a little bit when I was full time. ... It gives me a great appreciation for what this (new 2016 aerodynamic) package is like. It's not easy. It was hard."

ESPN.com'sJohn Oreovicz contributed to this report.

Gordon: Being away made me realize how tough this is
Jeff Gordon says his time away from the track made him realize "how tough" racing truly is, how the other drivers were able to take advantage of him on restarts and what racing with the new package was like.