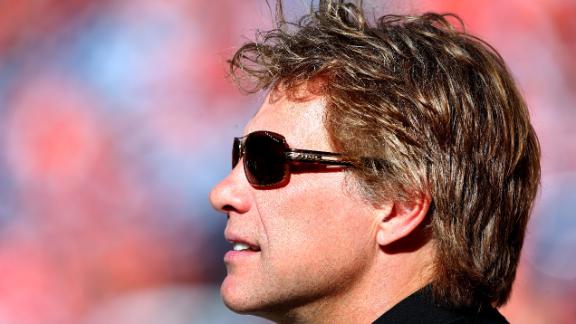 Rock star Jon Bon Jovi has sung repeatedly that he "ain't gonna be just a face in the crowd," and he's got a friend in high places that might help him on the path to becoming an NFL owner.

Dallas Cowboys owner Jerry Jones, speaking to reporters Monday at the NFL meetings in Atlanta, said Bon Jovi would be an "outstanding" NFL owner, as the singer has joined Larry Tanenbaum of Maple Leaf Sports & Entertainment as the principal members of a Toronto group expected to bid on the Buffalo Bills, according to the Toronto Sun.

"He knows many of the owners personally. All owners know of him," Jones said of Bon Jovi. "But he knows them personally. He's committed, he's very genuine.

"You talk about individuals and talk about their qualification -- there hasn't been anybody more qualified to be involved in sports ownership, or certainly ownership in the NFL, than Jon Bon Jovi."

Although Jones declined to comment directly on the Bills' future, he did offer a broader statement.

"We always ought to be looking for ways to improve not only the growing of the pie, but also growing the fan base," Jones said. "And to the extent that you can involve more fans in any team location is something to be considered.

"We certainly want to create every opportunity we can to involve more fans. At the end of the day, it's my town against your town, Cowboys against whoever we're playing. To the end that we can create more rivalries and involve larger viewing audiences, populations, that's something that you have to look at when you get a chance to, and that's the debate between Buffalo and Toronto."

And that may be where Bon Jovi and his business partners enter the picture.

"I don't know of anyone that I have any more respect for as a father, or as a husband, or certainly as a potential business partner," Jones said of Bon Jovi. "And so it's a credit to him that he's had the career that he's had, that he's qualified to become an NFL owner. As we know, you can't just wish for that. You have to be able to do something about that financially. So he's an outstanding candidate to be an owner in the NFL, and he's a great friend."