Jimmy Butler remains confident he can propel Bulls past Celtics 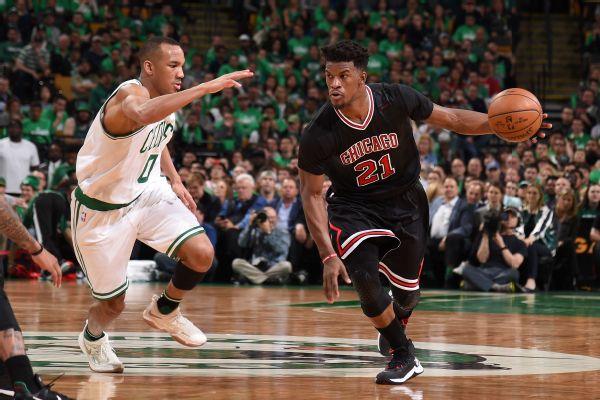 CHICAGO -- Jimmy Butler remains confident that he can help propel the Bulls past the Boston Celtics in their Eastern Conference quarterfinals series, even after a disappointing Game 3 loss on Friday night in which Butler scored just 14 points, going 7-for-21 from the field, and failed to go to the free throw line for just the fourth time in a game this season.

"You ain't going to play great every night," Butler said before Saturday's practice. "I don't feel like I changed the game defensively either. I don't think I did too much of anything. It's all right. We go out and play the way we're supposed to, I play the way I'm supposed to, along with everybody else. And then [the feeling is] back to the Bulls have a chance. So go out and do that, control that."

The Bulls still have a 2-1 series lead heading into Game 4 on Sunday night at the United Center, but the dynamic of the series shifted after the organization revealed before Game 3 that veteran point guard Rajon Rondo would be out indefinitely because of a fractured right thumb. The Celtics took advantage of the Bulls' misfortune and were able to slow down Butler, allowing him to settle for a lot of jump shots. Celtics guard Avery Bradley did a solid job defensively on the All-Star swingman, setting a more physical tone than in the first two games of the series. For his part, Butler says he enjoys the feistiness that both teams have started to show as the series goes along.

"I like that type of stuff," Butler said. "And we all know that. I like confrontations, stuff like that. It makes me smile. It gets me going, and everybody else. So I'm excited for what's coming forward, what's next. We got another one on Sunday. I woke up smiling this morning. I don't like to lose, but I'm fortunate enough to wake up and still be able to play this game."

Rondo set social media abuzz in the first half after appearing to try to trip Celtics forward Jae Crowder after Crowder hit a shot and fell deeper into the Bulls' bench than usual. Rondo brushed off the notion that he was trying to trip Crowder, explaining after the game that he was just trying to stretch his legs after ACL surgery a few years ago. Butler is hopeful that he and his teammates can still use the mental edge Rondo brings to the game, even though the point guard is stuck sitting on the bench in a cast.

"He's been through this before countless amounts of times," Butler said of Rondo. "He's won. So he knows what he's doing. I just think overall we got to take his edge, especially mentally. Older guys, younger guys, everybody. We got to think the game like he thinks it. Study it the way he studies it. Take note and take after him, because he does everything the right way."

In order to grab a commanding lead in this series, Butler understands he may have to initiate more of the offense with Rondo out. Jerian Grant and Michael Carter-Williams were both ineffective in Game 3, combining to go just 3-for-10 from the field and racking up seven turnovers. Grant admitted being disappointed in his performance but believes he will remain in the starting lineup on Sunday. Hoiberg was noncommittal when he was asked whether there would be a lineup shuffle.

No matter what happens, Butler expects he and his teammates will come out with a much better effort than they did on Friday night.

"I don't care how many games [it takes]," Butler said. "We just got to get to four. We don't care who counts us out. We really don't care who wants us to win. We're worried about the people that we got in here, because we're the ones that have to do it every day."
Related topics:
sportsespncelticsgame 3chicago bullsjimmy butlerjerian grantstrugglesnbarajon rondo
Copyright © 2020 ESPN Internet Ventures. All rights reserved.
More Videos
From CNN Newsource affiliates
TOP STORIES