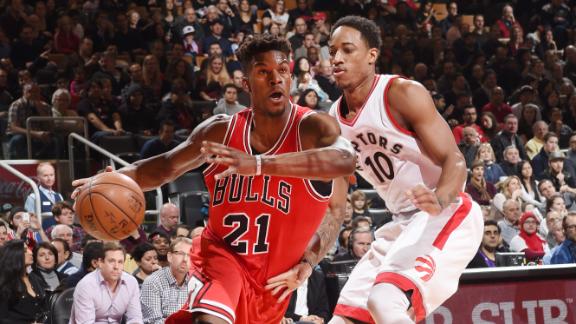 ESPN
By Nick Friedell
TORONTO -- Chicago Bulls swingman Jimmy Butler set a franchise record for points in a half during Sunday's 115-113 win over the Toronto Raptors. He scored40 of his 42 points in the second half to topMichael Jordan's 39, a feat that came in the second half against the Milwaukee Buckson Feb. 16, 1989.

Butler, who endorses Jordan's shoe and clothing lines, wanted no part of any comparisons to one of the greatest players of all time.

"Don't compare me to him," Butler said. "That's exactly what I said [when I found out]. I don't want to be compared to him because then people are going to think I got to do what he did. I'm trying. But we're nowhere near the same player."

Butler, who scored two points in the first half, acknowledged that he was upset after being elbowed in the face by Raptors swingman DeMarre Carroll in the second quarter.

Butler didn't believe the elbow was intentional, but he was fired up after leaving a significant trail of blood on the floor. He was taken to the locker, and one stitch was used to close a cut near his lip.

"He was a man possessed [Sunday]," Bulls forward Taj Gibson said of Butler. "He was so mad, so mad when he got hit in the mouth. You can tell, so much blood flowing everywhere, he was so mad. I've never seen him get that mad before.

"He's been in a rough game before, but especially getting his lip busted. But he came back a man possessed. Just going, trying to get stops, kept attacking the basket. It was just one of those nights where you just can't miss. When he hit that corner 3 [in the third], I knew it was his night.''

Butler's performance helped the Bulls come back from a 15-point deficit and left his teammates and coaches in awe, especially given that he did it without Derrick Rose (sore right knee/hamstring), Joakim Noah (shoulder) orMike Dunleavy (back surgery).

"It was an unbelievable performance by Jimmy," Bulls coach Fred Hoiberg said. "The way they were pressuring us in the first half, we couldn't get the ball reversed or swung, so we just put the ball in Jimmy's hands. Either ran isolation plays or had Pau [Gasol] or Niko [Mirotic] set a ball screen for him, and he just made play after play. He was unbelievable with the ball in his hands. Hitting fadeaways, hitting shots, that last 3, getting himself to the free throw line. Just a really, really good individual performance.''

Butler tried to take his performance -- and the reaction to it -- in stride. After finishing a postgame interview, he stopped to take a selfie with a fan on his way back to the locker room.

"I'm just happy we won, to tell you the truth," Butler said. "I don't want to be compared to [Jordan] because you see what he's done for this game. I'm just happy we got the win. Points or no points, we're leaving here with the W."