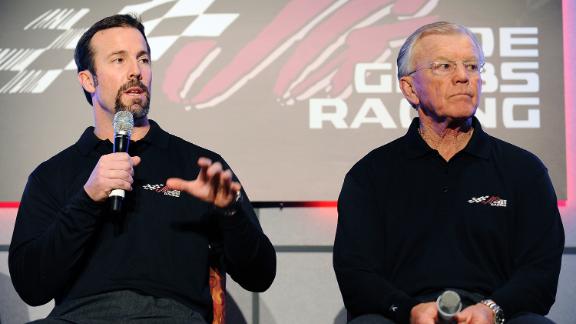 The serious health issue is not the first for the Gibbs family. J.D.'s son Taylor was diagnosed with childhood leukemia at age 2 in 2007 and had his final chemotherapy treatment at age 5 in 2010.

J.D. Gibbs, who serves as president and runs the day-to-day operations of the race team owned by his father, began having symptoms six months ago that led to the diagnosis of the brain condition, Joe Gibbs said Sunday at Martinsville Speedway.

"J.D. gains his strength from the fact that he has a personal relationship with the Lord, and I have got to tell you that he's my hero when I kind of watch him," Joe Gibbs said. "I don't know that anybody has ever dealt with anything as courageous as J.D. does.

"He went through a situation with his son Taylor having leukemia at 2, and we fought through that for about three or four years. ... J.D. through his entire life has probably been the most courageous person that I've ever been around or knew."

The team owner, who thanked the NASCAR community and fans for their prayers, did not take questions during his statement prior to the Sprint Cup race.

J.D. Gibbs addressed JGR personnel at a team meeting this week, which was followed by the public release of the news Wednesday.

"He got up and basically he said, 'I know that God has a plan and God puts us through things for a reason,'" Joe Gibbs said.

J.D. Gibbs played college football at William & Mary from 1987-90, had a brief racing career and also enjoyed extreme activities such as snowboarding and motor bikes.

"His situation medically, there's very few answers," said Joe Gibbs, the three-time Super Bowl champion coach. "We've been dealing with this for about six months and basically what the doctors say to you is that they just really don't know.

"J.D. has lived a very active lifestyle. ... We can't point to any one serious thing that happened to him, certainly any injury is a possibility that led us into some of the symptoms that he's experiencing now."

The father and son both handle administrative duties with the race team. J.D.'s brother, Coy, also is part of the management team and focuses on the organization's supercross team while also having input in the NASCAR team decisions. Joe Gibbs likely would handle any duties that J.D. cannot perform because of the treatment and at the race track, as J.D. likely will miss several races because of the full week of work and treatment.

"He seems upbeat about it," JGR driver Denny Hamlin said Friday about his talks with J.D. "I saw him last weekend at the race track, and he seems fine. It's not something that he really harps on, but obviously it's something that's very serious and you have to treat it seriously.

"I think that they've got some of the best doctors in the world trying to help him and trying to figure out what's going on."