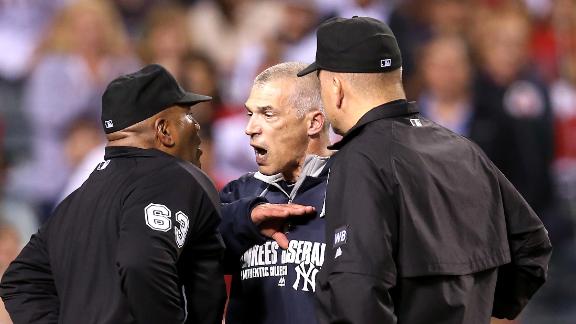 ANAHEIM, Calif. -- New York Yankees manager Joe Girardi was ejected in the eighth inning of Monday night's game between the Yankees and Angels after a vociferous argument with plate umpire Laz Diaz over a called strike to Brett Gardner.

In a 1-1 game, Diaz, who has had run-ins with Girardi and the Yankees before, called a 1-0 pitch from Jered Weaver a strike, although it appeared to be borderline low. Girardi rushed from the dugout to confront Diaz, shouting and tossing his hat to the ground several times.

"I mentioned to Laz in a respectful way that I thought the pitch was up to Kelly Johnson earlier in the game, and he gave me the Mutombo," Girardi said, imitating a wagging index finger. "I don't appreciate that. I'm not a little kid. I don't need to be scolded. Obviously we're trying to work together, and I just thought there were a lot of inconsistencies tonight.

"It's the biggest pitch of the game to that point," Girardi said of the 1-0 to Gardner that Diaz called a strike. "It's a lot different [at] 2-0. It changes the whole at-bat. Now the pressure is clearly on the pitcher."

Girardi believed Diaz was intentionally instigating conflict with the Yankees.

After Girardi was ejected, Gardner struck out. On the next pitch, Derek Jeter rapped into an inning-ending double play, snuffing out a threat that began with the Yankees loading the bases with none out.

It was Girardi's first ejection of the season and first since Aug. 18, when he was tossed after a melee between the Yankees and Boston Red Sox over a Ryan Dempster beanball directed at Alex Rodriguez.