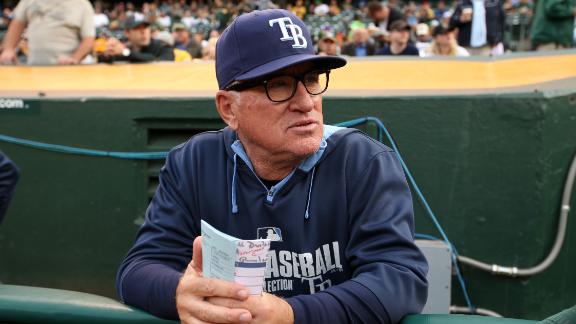 The Rays announced Friday that Maddon has exercised an opt-out in his contract, which was due to expire after next season.

Owner Stuart Sternberg said in a statement: "We tried diligently and aggressively to sign Joe to a third contract extension prior to his decision. As of yesterday afternoon, Joe enabled himself to explore opportunities throughout major league baseball. He will not be managing the Rays in 2015."

Maddon has managed the Rays for nine seasons, compiling a 754-705 record. He led Tampa Bay to the playoffs four times, won two AL East titles and one World Series appearance.

Friedman assembled the teams that Maddon guided in transforming the Rays from perennial losers into a club that had six consecutive winning seasons before finishing 77-85.

"In the last several days we worked with Joe to try to figure out a contract extension," Friedman's replacement, Matt Silverman, said during a conference call. "We engaged and made many offers and it became clear from his responses that it was not an exercise that was going to lead to an outcome."

Silverman, who took over as head of baseball operations after serving as team president for a decade, said Maddon's contract contained a clause that allowed to opt-out under certain conditions, including Friedman leaving the Rays.

Friedman's departure on Oct. 14 led to immediate questions that when Maddon's contract with the Rays expired after the 2015 season that Friedman might try to lure him to the Dodgers.

"As I said last week, Joe and I enjoyed a tremendous relationship working together in Tampa Bay and I wish him nothing but the best wherever his next stop will be," Friedman said in a statement. " However, nothing has changed on our end. Don Mattingly will be our manager next season and hopefully for a long time to come."

Silverman said he was "surprised" and "disappointed" by Maddon's decision. A search for a new manager will begin immediately, but there's no timetable for naming a successor.

"I believe Joe wanted to be the manager of the Rays long term. That was my intention and Stu's intention. We dove head-first into discussions, but it takes two parties to reach an agreement," Silverman said.

"I'm very comfortable with the financial offers that we made Joe. They were very generous," Silverman added. "He listened to those and chose to opt-out."

Rays outfielderWil Myerstook to Twitter to wish Maddon his best.

Would have loved to see Joe stay, but wish him the best going forward. We will move forward as a team.

- Wil Myers (@wilmyers) October 24, 2014Information from The Associated Press was included in this report.