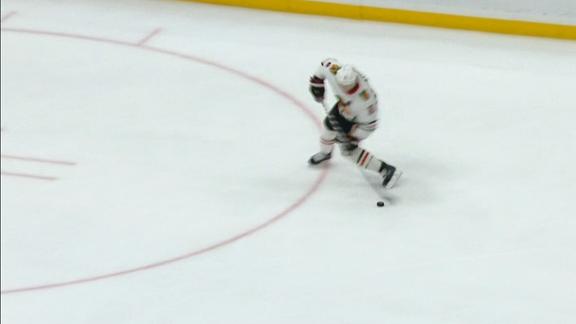 There was speculation about the status of both men's jobs after the Blackhawks failed to qualify for the playoffs for the first time in a decade. It has been a season of disappointment for Chicago. With two games remaining, the Blackhawks are 33-37-10 and in last place in the Central Division. That's a stark change from what the team has been accustomed to under Quenneville and Bowman's watch.

"There were a lot of circumstances that happened this year that were out of our control. That's not to say that areas of our team could not have performed better. They could have," McDonough said. "And I'm not assessing blame, but I believe in both of them. I want both of them to succeed, and I think we're going to be headed in the right direction, after a lot of reflection and assessment."

Quenneville, who was hired in October 2008, is the league's longest tenured coach. Bowman, the son of legendary coach Scotty Bowman, has been on the job since July 2009. Together they have combined for three Stanley Cups.

The 2017-18 season is Quenneville's first losing season in his 21 years as an NHL head coach.

The Blackhawks have been without starting goaltender Corey Crawford for most of the season. Crawford, who had a .939 save percentage and 2.27 goals against average in 28 games, last suited up on Dec. 23. He has been on injured reserve since then with what is believed to be a concussion.

When asked about the long-term diagnosis for Crawford last week, Quenneville said: "We expect him to be fine."

Quenneville has two years and $12 million remaining on his contract.

The Blackhawks, who have been handcuffed by the salary cap for years, turned to youth this season to complement Patrick Kane, Jonathan Toews, Duncan Keith and Brent Seabrook.

Alex DeBrincat, 20, leads the team in goals with 28. Nick Schmaltz, 21, has 51 points. Before the season, the Hawks traded longtime defenseman Niklas Hjalmarsson for 24-year-old blueliner Connor Murphy. During the year, they dealt Richard Panik for 22-year-old forwardAnthony Duclair.

Also, top prospect Dylan Sikura, 22, made his debut this week after finishing his career at Northeastern and posted three assists in three games. Defenseman Blake Hillman, 22, scored his first goal for Chicago Wednesday in just his second pro game after his collegiate season ended at Denver.

It has been a season of rare job stability in the NHL. For the first time since the Original Six expansion, there have been no midseason coaching changes.