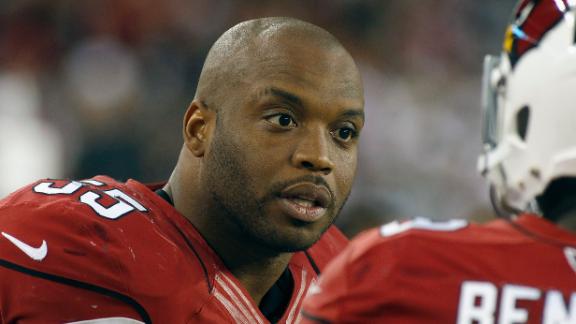 TEMPE, Ariz. -- The Arizona Cardinalshave placed outside linebacker John Abraham on season-ending injured reserve due to a concussion, the team announced Friday.

Abraham, 36, had been going through the final stages of the NFL's concussion protocol since Monday but had yet to pass. On Wednesday, coach Bruce Arians said Abraham failed the protocol Tuesday and needed to wait 48 hours before he could try it again. Abraham didn't practice Wednesday or Thursday, spending the open portion of Arizona's practice riding a stationary bike.

Arians was hoping to have Abraham for Sunday's game against San Francisco. He would've re-entered the starting lineup once cleared to play. Arians meets with the media Friday afternoon.

Abraham suffered a concussion in the third quarter of Week 1 on "Monday Night Football." A day later, he took a week-long leave of absence. He decided to return to the Cardinals on Monday, saw a neurologist later that day and rejoined the team Tuesday.

During his Monday news conference, Arians said that Abraham was "ready to play."

"I knew a lot of it was to do with the headaches and the first real big one he's ever had," Arians said Monday. "There are other things we're dealing with and he's fine with those."

On SiriusXM NFL Radio on Tuesday, Arians said he thought the five-time Pro Bowler was shaken by the concussion, his first such reported injury according to ESPN Stats & Information. The NFL's active sacks leader with 133.5, Abraham will earn his $3 million salary by going on injured reserve instead of retiring.