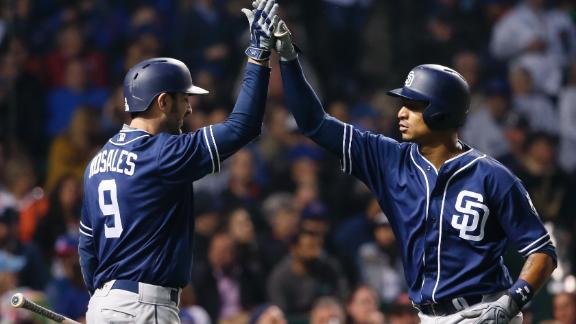 CHICAGO -- Chicago Cubs pitcher John Lackey was apparently upset with the waySan Diego Padres catcher Christian Bethancourtreacted after hitting a home run in the Padres' 1-0 win over the Cubs on Wednesday night.

"How many home runs does he have?" Lackey asked sarcastically after the game.

Wednesday was Bethancourt's third of the season, and it was a monster blast to left that landed on the street outside Wrigley Field. Bethancourt watched it for a moment before rounding the bases.

"I got a long memory," said Lackey (4-2), who took the loss after going eight innings and allowing a run on three hits, with no walks and seven strikeouts.

Bethancourt and Lackey don't have a history; this was the first meeting between the hitter and pitcher, which Lackey was well aware of.

Bethancourt's homer was the lone run of the game, giving the Padres a doubleheader sweep and the Cubs their first two-game losing streak of the season.

Lackey irate with Bethancourt's HR reaction
Christian Bethancourt breaks up John Lackey's perfect game in the fifth inning with a solo home run. Bethancourt took a few strides before taking off for the bases, which didn't sit well with Lackey.