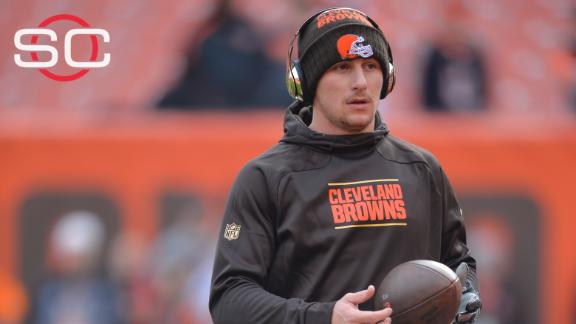 DALLAS -- Dallas police said Thursday they have referred their domestic violence case against Johnny Manziel to a grand jury, which will consider whether to charge the troubled Cleveland Browns quarterback on allegations that he attacked his ex-girlfriend.

Police released a statement saying they have asked the Dallas County District Attorney's Office to present a misdemeanor assault case to the local grand jury. Such a charge carries a maximum punishment of one year in jail and a $4,000 fine.

Manziel's attorney, Bradley Beckworth, didn't immediately return an email seeking comment Thursday. Manziel's agent and marketing agency have both dropped him, and the Browns have indicated they will release Manziel as early as March 9, when the league begins its new calendar year.

The 2012 Heisman Trophy winner and Texas A&M star was accused by ex-girlfriend Colleen Crowley of hitting her and threatening to kill her during a night out on Jan. 30. Crowley said Manziel accosted her at a Dallas hotel and later struck her when they drove back to her apartment in Fort Worth.

Crowley said in court documents that he hit her so hard, she temporarily lost hearing in one ear. Crowley's attorney, Kathy Kinser,told Dallas-Fort Worth television station NBC5 that Crowley had a ruptured eardrum as a result of the assault.

Sashi Brown, the Browns' executive vice president of football operations, said at the NFL combine Thursday that the team would not comment further on Manziel's situation.

"I'm not going to comment again on Johnny,'' he said. "I think, respectfully, we want to give the young man some privacy. Our organization has spent enough time talking about him and we need to focus on moving forward.''

A longtime Dallas criminal defense attorney, Pete Schulte, said police handling of the Manziel case was puzzling. Based on Crowley's affidavit, Schulte said police likely had enough information to at least charge Manziel. Misdemeanor cases like the one Manziel is facing are typically decided by police, not a grand jury, Schulte said.

"I think they're giving Johnny more of the benefit of the doubt than they give every other citizen they deal with," he said.

Crowley requested and was granted a protective order against the 23-year-old quarterback -- which Manziel also signed -- that prevents him from seeing her for two years. The order also requires Manziel to stay at least 500 feet from her home and place of work, and that he pay $12,000 in legal fees.

Crowley alleged she and Manziel had a confrontation in a Dallas hotel room, which eventually continued downstairs to the valet station. She said he forced her into a car and a valet disregarded her pleas for help. The two eventually drove to where her car was parked in front of a Dallas bar, she said in an affidavit. She accused Manziel of getting into the driver's seat and beginning to drive her.

She said she tried to jump out, but he stopped the car, dragged her back inside and hit her.

She said Manziel threatened to kill himself as he drove her back to Fort Worth, about 30 miles west of Dallas, where police were called.

Dallas police announced on Feb. 5 that they were investigating the case.

In the wake of the allegations, Manziel's father said the family had made two recent, unsuccessful attempts to get him into a rehab clinic.

Manziel, who entered the NFL with a reputation for partying and drinking, spent 73 days last winter in a Pennsylvania treatment center specializing in care for alcohol and drug dependency.

Manziel was cleared of any wrongdoing last year after he and Crowley got into a heated roadside argument near the player's home. Witnesses to that incident saw Manziel arguing on the side of a highway with his girlfriend and pulling her back into his car as she tried to leave the vehicle. He was not arrested and Crowley told police she didn't want to press charges.

The NFL did not immediately respond to a message seeking comment.

The Associated Press and ESPN Browns reporter Pat McManamon contributed to this report.

Dallas police department surprises with statement on Manziel
Jeannine Edwards has the latest from Dallas, where Johnny Manziel's domestic violence case is being sent to a grand jury, and explains why the police department surprised everyone with a statement Thursday and what the possible timeline is for the case.
Related topics:
sportsespndallasgrand jurymisdemeanorcolleen crowleystories about the city of dallasdomesticpolicenflcleveland brownsdepartmentjohnny manzieldaviolence
Copyright © 2020 ESPN Internet Ventures. All rights reserved.
More Videos
From CNN Newsource affiliates
TOP STORIES