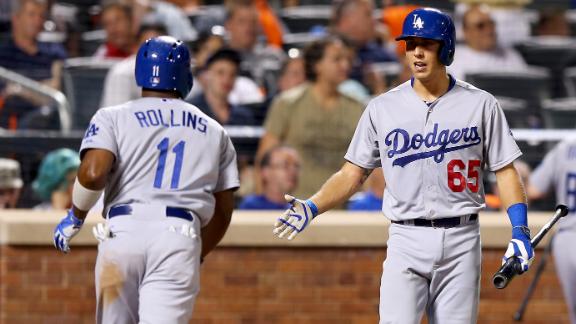 NEW YORK -- Mets left-hander Jonathon Niese has enjoyed better days on the mound, but he still should remember Friday fondly.

Aware in the early afternoon that Leah was about to give birth, Niese still elected to proceed with his scheduled start against the Los Angeles Dodgers at Citi Field. He surrendered six runs in a season-low three innings, then made his way to the airport for a flight on a private plane to his native Ohio.

Manager Terry Collins told Niese in the second inning that the baby was coming, Mets catcher Kevin Plaweckisaid. Niese proceeded to surrender homers to Justin Turner and Yasiel Puig when he returned to the mound for the third inning before getting pulled from the game because of performance.

Niese watched the birth on FaceTime before he took off from New York, a team spokesman said.

"I'm just happy that he's able to get back there to her now," Plawecki said. "He did a great job given the circumstances today."

Added Collins: "We discussed the whole thing about his options, and he wanted to pitch. So he did."

Following Friday night's 7-2 loss,the Mets on Saturday officially placed Niese on paternity leave. They replaced him on the active roster with right-hander Logan Verrett, who was scratched froma scheduled Friday start with Triple-A Las Vegas in anticipation of Niese's absence. Verrett, who has a 0.73 ERA at the major league level with the Mets this season, joined the team Saturday.

Niese had been scheduled to oppose Dodgers ace Zack Greinke on Friday. Greinke instead was placed on paternity leave and was present for the birth of his first child, son Bode Nicholas. He will rejoin Los Angeles and face the Mets on Sunday as he attempts to build on a 43 2/3-innings scoreless streak.

Niese became the second Mets pitcher this season to have the birth of a child conflict with mound activity.

Closer Jeurys Familia chose to pitch the ninth inning and escaped a bases-loaded jam June 12 against the Atlanta Braves at Citi Field. His fiance gave birth to son Jeurys Jr. while Familia was pitching. Familia then hustled to a hospital in Hackensack, New Jersey, to join his family.