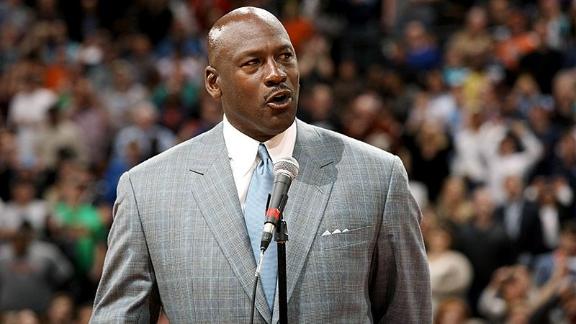 Jordan said Monday that with three draft picks and more than $13 million to spend in free agency the Hornets are in position to make a "big difference" in upgrading their roster.

"I think we made a difference last year with Big Al [Jefferson] and some of the acquisitions, and I don't anticipate this year being any different," Jordan said.

Behind Jefferson, who was recently named third-team All-NBA, Charlotte made the playoffs for the first time since 2010 -- the year Jordan took over as majority owner.

Jordan hopes that Jefferson's success will persuade other big-name free agents to come to Charlotte.

"I always thought Charlotte was a great destination," Jordan said. "Big Al has proven that you can come here and make a big difference. Hopefully we can look at that and attract some other superstars."

Jordan spoke Monday after a presentation at Hornets Nest Elementary school in which he, along with Lowe's and Fox Sports South, donated $250,000 to Charlotte-Mecklenburg Schools. The event marked the organization's first community service initiative since changing its name from Bobcats to Hornets last month.

The Hornets have the ninth, 24th and 45th picks in this month's draft.

If forward Josh McRoberts decides not to opt out of his contract, the Hornets will have all five starters from last season under contract and at least $13 million to spend under the NBA salary cap. If McRoberts opts out, the team could have closer to $17 million free under the cap.

"This year we have a lot of flexibility, and I've been speaking to that over the last three or four years. Flexibility is very important, and we are going to use every resource to try to better the team," Jordan said.

However, Jefferson injured his foot in the first game of the postseason and Charlotte was swept by the Miami Heat.

Still, it was a big step in the right direction for a franchise that went 28-120 over the two previous seasons, by far the worst record in the NBA during that span.

Jordan said he was proud of what his team accomplished under first-year coach Steve Clifford.

"The guys came out and took the initiative from Coach, and he was able to bond [them] and put together a good effort from the team," Jordan said.

Jordan said Jefferson, who signed a three-year, $41 million contract on July 4 -- the largest ever given out by the franchise -- was better than advertised. But he said what was even more surprising is how quickly Jefferson's new teammates adjusted to playing with a dominant low-post presence.

"Everybody surrounded him, and we got better," Jordan said. "McRoberts was a huge part of that. So I think we got better as the year went along."

Jordan said Jefferson, who was the only player in the Eastern Conference to average 20 points and 10 rebounds per game last season, deserved to be an All-Star.

The Hornets owner wouldn't say specifically what position the team might look to upgrade this offseason, instead saying he wants to find players who truly want to play in Charlotte.

"We have a bunch of young talent that we still are trying to nourish into some better basketball players," Jordan said. "So summer is when we have to make our big leap."

Jordan: Hornets On Edge Of Improvement
Kevin Pelton discusses why Michael Jordan is optimistic about the future of the franchise.