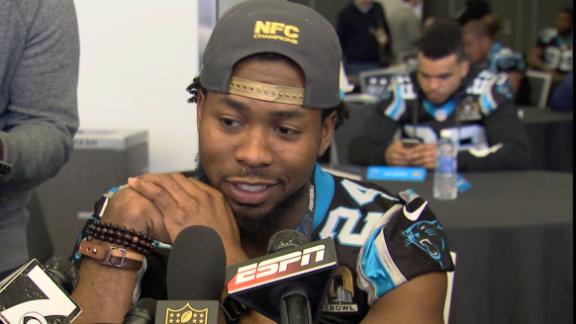 "I think you'd have to be pretty darn good at what you do to talk your way into the spotlight,'' Norman told reporters during Thursday's Super Bowl media availability. "I haven't been hearing much about him. Obviously he may want to go back and go practice some more."

Norman sometimes can be brash and outspoken. He also has backed up his words with performance.

He was named the NFC Defensive Player of the Month for September after intercepting four passes in the first four games. He returned two for touchdowns.

Opposing quarterbacks had a passer rating of 54.0 when targeting Norman during the regular season. That, according to Pro Football Focus, rated Norman No. 1 among corners.

Yet on Wednesday Sanders said Norman "talked himself into the media.''

Norman likely won't spend much time in Super Bowl 50 covering Sanders, who plays most of the time in the slot. He'll likely be on Denver's top receiver, Demaryius Thomas.

Norman has a reputation for going to what he calls his "dark place'' when offended by opponents. He said the Broncos haven't gotten under his skin enough to push his buttons, yet.

"It's way too early,'' Norman said. "I'm not going back and forth, but him obviously saying something to me ... it's just the buildup.''