Justin Gatlin on criticism by Lilly King: I've done what I need to do 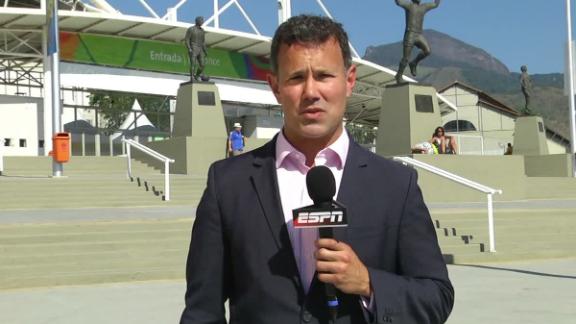 American sprinter Justin Gatlin has a message for United States swimmer Lilly King: Not so fast.

King, 19, was critical earlier this week about the Olympic participation of athletes -- including Gatlin -- who have tested positive for banned substances in the past. Gatlin has twice been caught using banned substances, but is considered the top threat to unseating Jamaican star Usain Bolt in the 100-meter final Sunday.

"I don't even know who Lilly King is," Gatlin said after winning his 100-meter heat Saturday in 10.01 seconds -- the best time of the day. "She does swimming and not track and field.

The 34-year-old Gatlin, who won gold at 100 meters at the 2004 Olympics, first tested positive for amphetamines, though arbitrators determined he didn't use them for doping but to treat attention deficit disorder. The second came for excessive testosterone in 2006 and resulted in a four-year ban.

King originally made her comments after the Court of Arbitration for Sport allowed Russian swimmer Yulia Efimova to compete in Rio after a last-minute appeal of her doping ban.

"Do I think people who have been caught doping should be on the team? They shouldn't," said King, who beat Efimova to win the gold medal in the women's 100-meter breaststroke. "It's unfortunate that we have to see that and then it's such a tossup in between sports and in between countries. It's something that needs to be set in stone that this is what we're gonna do to settle this and that should be the end of it. There should not be any bouncing back and forth."
Related topics:
sportsespnbanned substancejustin gatlinusadadopingyulia efimovaespnwwadaswimmingcasolympic sportsriolilly king100 meterstrack and fieldsuspension
Copyright © 2020 ESPN Internet Ventures. All rights reserved.
More Videos
From CNN Newsource affiliates
TOP STORIES