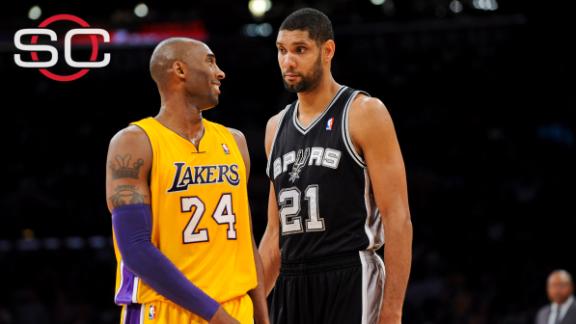 Kobe Bryant and Tim Duncan have achieved so much during their remarkable NBA careers, winning a total of 10 championships between them. But if you had to choose, who would you say has had the better career?

Hall of Famer Kareem Abdul-Jabbar -- a Los Angeles Lakerslegend whose statue stands outside the Staples Center -- is going with "The Big Fundamental" based on his health and overall, sustained success with the San Antonio Spurs.

"Jeez, I would say that Tim Duncan has had a better career just because they've been able to win more consistently, and they didn't have to rely on Tim all the time," Abdul-Jabbar said during a recent "Conversations with Tyler" interview with Tyler Cowen at George Mason University.

Another Lakers legend and Hall of Famer, however, disagrees with Abdul-Jabbar's choice.

"Kareem can have his opinion," Magic Johnson told SportsCenter on Tuesday. "Both of them won the same amount of championships. I'm always going to be partial to a Laker because I love Kobe, I know him as a man and a person. What he did for the city and for basketball fans all over the world ... he was a guy who made these young players work out harder, do more, because he was working out so hard. LeBron, all those guys, followed Kobe Bryant. And he's been a guy who's said, 'Hey guys, this is how you do it,' and guys have followed."

Both players are destined to join Johnson and Abdul-Jabbar in the Hall of Fame, and both have won five NBA titles during their career -- one less than Abdul-Jabbar's six. Bryant, 37, has averaged 25.1 points over his 19-year career -- all with the Lakers. The 39-year-old Duncan, meanwhile, has averaged 19.2 points and 10.9 rebounds in his 18 seasons -- all with the Spurs.

"Kobe has worn his body out. He's only like 36 years old and he's worn his body out," Abdul-Jabbar said. "It's falling apart because of the stress that he had to do just taking on the load that he did, but he wanted to do it that way. That was that."